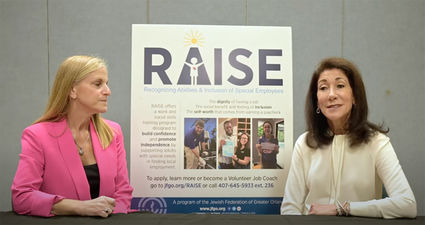 Rachel Slavkin (l) and Loren London on the set of A World of Difference.

Recently featured on the TV program A World of Difference were RAISE director, Loren London, RAISE director of Employment and Education Rachel Slavkin, and three gainfully employed RAISE alumni. A World of Difference is a monthly TV series that celebrates neurodiversity, which is a viewpoint that brain differences are normal, rather than deficits. The idea of neurodiversity can have benefits for children with learning and thinking differences. This concept can help reduce stigma around learning and thinking differences.

The program was created three months ago by Beacon College in Leesbu...