What Israel and Morocco will gain from re-establishing ties 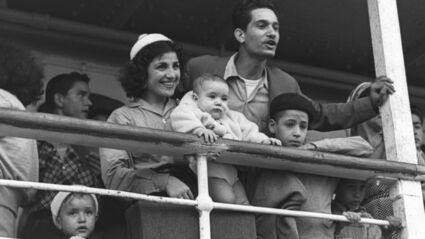 Moroccan Jewish immigrants landing at the Haifa port in 1954.

(ISRAEL21c via JNS) - The Dec. 10 announcement of the re-establishment of diplomatic relations between Morocco and Israel marked the fourth time in the past four months that a Muslim-majority nation officially "friended" Israel.

But this was different from September's historic Abraham Accords, linking Israel with the United Arab Emirates and Bahrain in the Persian Gulf, and October's normalization agreement with Sudan.

"The Israel-Moroccan relationship has existed on the security, economic and diplomatic level, even on the cultural and personal level, for many years," Maddy-Weitzman told members of the foreign press on Thursday night.

"Morocco opened a diplomatic office in Israel in 1994 after the Oslo Accords, but closed it in October 2000, following an Arab League resolution calling for cutting off ties with Israel. However, the relationship continued over the following two decades. King Muhammad VI didn't see a need to formalize that relationship until now."

The time was right, says Maddy-Weitzman, because the Trump administration offered Morocco recognition of official sovereignty over the Western Sahara - a critical foreign-policy issue for Morocco since the mid-1970s - in return for normalization with Israel.

"The Abraham Accords with Gulf states that are allies of Morocco gave Morocco some political reinforcement to pay the price for recognition that it wasn't willing to pay for the past 20 years," he explained.

And what is the benefit for Israel, aside from direct flights that will give a nice boost to the tourism sector?

"There is room for economic development, trade and technology transfer. Israeli expertise has a good name and there's no reason the Moroccans wouldn't want that," said Maddy-Weitzman.

Perhaps even more significant, "Morocco has importance geopolitically and is part of the anti-Iranian club of monarchies," as well as an influential member of the Arab League, even though it does not define itself as an Arab state.

"Israel becoming an accepted, recognized and legitimate state in the region is a significant development and carries weight in ways that cannot be measured," said Maddy-Weitzman.

Morocco had the largest Jewish community in North Africa until 1948, when the establishment of the State of Israel triggered riots and started the exodus of about a quarter-million Jews by 1967, the majority coming to Israel.

Israelis of Moroccan heritage have continued to identify proudly with Moroccan culture, and Israeli tourism to Morocco has been going on for years, Maddy-Weitzman added.

The AFP news agency reports that Moroccan Jewish history and culture will soon be part of the national school curriculum, a decision that "has the impact of a tsunami," said Serge Berdugo, secretary-general of the Council of Jewish Communities of Morocco.

The door is open

Danny Danon, who recently finished a five-year stint as Israel's ambassador to the United Nations, said he enjoyed a "very friendly" professional relationship with his U.N. counterpart from Morocco.

"Morocco is a door-opener to the Arab world and Africa, and what we did quietly before we can do publicly with them now," Danon told ISRAEL21c during a virtual meeting with the press.

Danon and Maddy-Weitzman acknowledged that Morocco is not yet looking to open an embassy in Israel but to restore the level of diplomacy that existed before 2000.

"We will have diplomatic representatives and direct flights," said Danon, whose father and in-laws were of Moroccan descent. "Our eventual goal is full diplomatic relations with an Israeli embassy in Rabat."

Danon said to expect "more Arab countries that normalize relations with Israel. It's important for us to export more knowledge, build more bridges and develop relations with more countries in the region."

Meanwhile, on Dec. 12, Israel announced normalization with Bhutan, a small nation between China and India whose majority religion is Buddhism.

Danon said there is no connection between the Morocco and Bhutan agreements.

"Bhutan isn't eager to establish foreign relations in general, so it sends an important message that it is officially engaging with Israel," he said.

Danon noted that of the 193 U.N. member states, Israel now has official relations with close to 170, "and with many others we have relations that are not public."