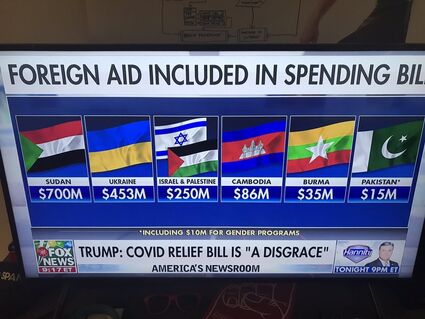 A Dec. 23 graphic on Fox News showed "Palestine" as a country even though it is not an actual nation.

(JNS) - A graphic on Fox News last week showed "Palestine" as a country, despite it not being an independent nation.

The graphic appeared during the Dec. 23 broadcast of "America's Newsroom" during a segment about U.S. President Donald Trump complaining about foreign aid in the legislative package Congress passed this week that included $1.4 trillion to fund the government and around $900 billion in COVID relief.

Fox News did not respond to a request for comment.

A similar error occurred in April when an MSNBC graphic showed "Palestine" in a rolling list of countries.