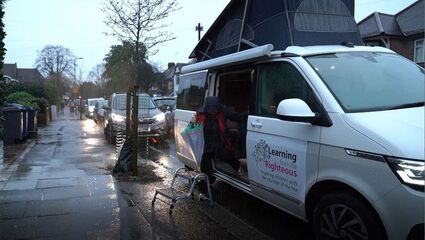 (JTA) - As one of the youngest Holocaust survivors, Eva Clarke has spent years telling the story of how her mother, weighing just 68 pounds, gave birth to her inside a concentration camp just a month before it was liberated.

But this past spring, as COVID-19 shut down public life, Clarke's visits to schools and community centers in the United Kingdom "came to a screeching halt, indefinitely," she recalls.

Earlier this month, she got a fresh audience when an RV pulled into her driveway in Cambridge.

Inside was Antony Lishak and a retrofitted interior that would allow her to tell her story safely, and for posterity, during the pandemic.

Lishak has spent years teaching about the Holocaust to young audiences using the real-life testimonies of Holocaust survivors and rescuers. Even before the pandemic, time was not on the British educator's side.

First-person accounts, delivered live, have the strongest effect on the students Lishak is trying to reach, he said. But survivors are dying and the ones still alive find it more difficult year each to deliver the talks that he organizes for them at British schools.

The pandemic put these interactions on pause, costing him time that he "couldn't afford to lose," Lishak said.

Finally, months into the pandemic, Lishak came up with a way around the impasse.

In recent weeks, he has been traveling across the United Kingdom in an RV that he turned into a coronavirus-proof mobile studio for Holocaust survivors whose testimonies he films right outside their homes.

"I can't tell you what it looks like on the film, but it's an ingenious idea," said Lili Pohlmann, a 90-year-old Jewish woman from London whom Lishak also interviewed this month.

Pohlmann survived the Holocaust in Lviv, in what is now Ukraine, thanks to the bravery of Andrey Sheptytsky, a senior priest, and Imgard Wieth, a German civil servant. Pohlmann and her mother were the only members of her nuclear family who survived.

"In these circumstances, of course, I couldn't have done it now at all," she said about the testimony she gave recently in the mobile studio. "I unfortunately can't go out. So I'm at home and I can't have anybody come in."

"It's outside the box, but it means the work can go on," Lishak told the Jewish Telegraphic Agency earlier this month about the studio as he prepared to drive to interview Clarke inside his rented Volkswagen California Ocean camper, which he had fitted with a Perspex divider to keep the interviewees safe.

The van has heating, a pop-up coffee table for the witnesses, revolving front seats and enough space for Lishak to comfortably record with a wide-angle lens, he said.

Lishak, CEO of the Learning from the Righteous educational nonprofit, needs a portable studio because videoconferencing is logistically difficult for many elderly witnesses.

Some chroniclers of the Holocaust, including the U.S. Holocaust Memorial Museum, have turned to videoconferencing to record interviews during the pandemic. But Lishak said in-person interviews are preferable.

"A live Zoom event is difficult to set up" for many survivors, he said. But the real problem is that the medium isn't conducive to the content for the student audiences he aims to reach

An edited video testimony is a superior medium for "a generation who are used to TV-quality presentation," he said.

In January, ahead of International Holocaust Remembrance Day, Finchley Reform Synagogue, a funder of the mobile studio initiative and one of London's largest Jewish congregations, will host Lishak's interviews on its website, ensuring they will reach thousands of viewers.

"You can record Zoom sessions, but I doubt people will sit down and watch them as they would a well-edited testimony video," Lishak said.

Giving survivors a voice on International Holocaust Remembrance Day is a "duty," he said. It's theme this year in the United Kingdom is "Be the Light in the Darkness."

Clarke, a retired university administrator, is comfortable using videoconferencing software. But the interview she gave Lishak in her driveway in Cambridge on Dec. 14 was "much more intimate, which of course helps tell the story."

Lishak said the intimacy that sets in during encounters with Holocaust survivors and high school students is "a crucial factor" in making them interested in the Holocaust. It made all the difference during his work at schools in impoverished neighborhoods in Manchester, he said.

Recorded interviews will not be as powerful as real-life encounters but are more effective than "chaotic Zoom meetings," Lishak said. "It's the best option we have right now."

In the future, he is planning to complement testimonial videos with a live video Q&A session. Lishak said he's also looking into expanding the studio into a larger mobile classroom that can stage face-to-face encounters with survivors and take them to relevant memorial sites in the United Kingdom and Europe. 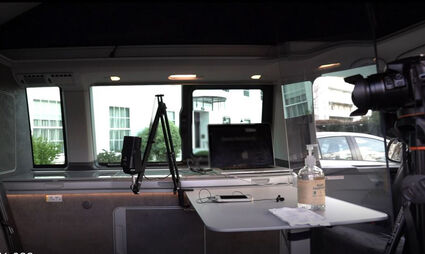 A look inside the interior of the Learning from the Righteous mobile studio in London.

That way, he said, "the bus would drive up to the witness' home instead of the other way around and visit a Holocaust heritage or memorial site during the same trip."

Clarke, 75, has spent the past 15 years telling her story and that of her mother, Anka Kaudrova, who died in 2013. Clarke weighed just 1 1/2 pounds when she was born at the Mauthausen death camp in Austria, where the Nazis had killed some 90,000 people, just one week before its liberation by the U.S. Army.

"I find it extremely important to tell that story, which I've sort of taken on after my mother died," Clarke said.

"I tell my family's history out of a sense of commitment to her and to our society, to warn others of where racism can lead," said Clarke, who has visited hundreds of schools across the United Kingdom. "It means so much to be able to carry on her work."