Sheldon Adelson, megadonor to Israel and Republicans, is dead at 87 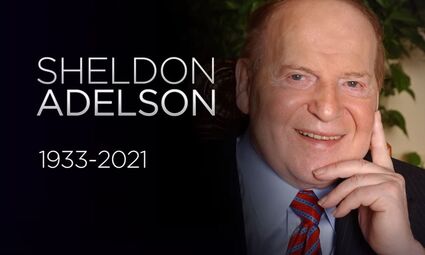 (JTA) — Sheldon Adelson, the billionaire casino magnate whose philanthropy had an unparalleled influence on American and Israeli politics and Jewish causes, has died at 87.

Adelson, the chief executive of the Las Vegas Sands Corporation, had an especially outsized influence in Las Vegas, the seat of his global gaming empire where many Jewish institutions are named after him and his wife, Miriam.

Adelson was a megadonor who set records for his political giving to Republicans. In his final years, he was also a significant supporter of President Donald Trump. A newspaper he owns, the Las Vegas Review-Journal, was one of the only newspapers to endorse Trump in 2016.

He also had enormous influence in Jewish philanthropic circles, pouring millions into the Jewish identity-building program Birthright Israel and backing Israeli Prime Minister Benjamin Netanyahu with his support of Israel Hayom, a free daily newspaper seen as supportive of the Israeli leader. Adelson started Israel Hayom in 2007 to compete with other dailies that are less friendly to the right and its success — it is now Israel’s most-read — has been considered instrumental to Netanyahu’s continued success.

Born in Boston in 1933, Adelson was known for his deep and polarizing involvement in local, national and international politics, especially his support for Israel and the Republican Party.

His aggressive approach resulted in conflict at times: In 2019, a federal judge ordered him to pay millions of dollars in fees to the National Jewish Democratic Council for using what the judge called “legal sadism” to effectively put the group out of business. Adelson was a major donor to the Republican Jewish Coalition.

And ahead of last year’s presidential election, Adelson reportedly fell out of favor with Trump over the size of his gifts. In one of his final big purchases, Adelson reportedly paid $67 million for the mansion in Israel that was the US ambassador’s residence until Trump moved the U.S. Embassy from Tel Aviv to Jerusalem.

During the coronavirus pandemic, Adelson also gained attention for being magnanimous to the thousands of employees of his casinos, whom he kept paying long after other Las Vegas casinos cut off paychecks to their workers.

The extent of Adelson’s giving to causes and institutions he believed in has few equals in American philanthropy. He was the largest donor to Trump’s 2016 presidential bid, chipping in $25 million, and was the nation’s largest political donor in the 2012 election, at nearly $93 million.

He also gave enormous sums of money to pro-Israel causes. He has donated $127 million to Birthright Israel since 2007 according to IRS filings cited by the Center for Public Integrity. And he was a major backer of the Zionist Organization of America and Israel’s Yad Vashem Holocaust Memorial Museum. Earlier in his career, he was a major funder of the American Israel Public Affairs Committee, until he shifted his giving to more conservative pro-Israel organizations.

Adelson was also a major supporter of drug addiction programs, a speciality of his wife Miriam, a physician. A drug abuse treatment clinic in Las Vegas is named for the couple.

“Sheldon was the love of my life,” Miriam Adelson said in a statement Tuesday. “He was my partner in romance, philanthropy, political activism and enterprise. He was my soulmate. To me — as to his children, grandchildren, and his legions of friends and admirers, employees and colleagues — he is utterly irreplaceable.”

He is survived by his wife and five children.