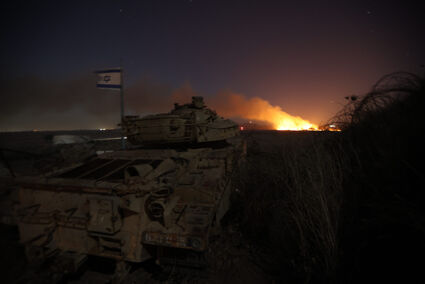 View of a large fire broke on the Israeli-Syrian border in northern Israel on Oct. 26, 2020.

(JNS) - Media reports carried news of intensive airstrikes against Iranian-linked targets in eastern Syria early on Wednesday, attributed to the Israeli Air Force. The alleged strikes in the Deir al-Zour and Albu Kamal areas were the latest in a long series of reported Israeli attacks that are designed to thwart the Islamic Republic's attempts at building a war machine in Syria.

The airstrikes nevertheless stood out in light of the extraordinary comments made by a senior American intelligence official, who told the Associated Press that the bombings were enabled by intelligence provided...