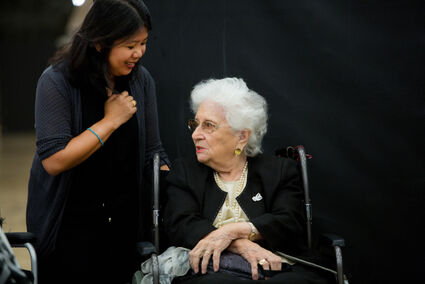 Ruth Dayan, Oct. 6, 2015. Dayan was the founder of the Maskit fashion house and active in many social causes. She was the first wife of the late Israeli general and politician Moshe Dayan.

(Israel Hayom via JNS) - Ruth Dayan, the first wife of the late Israeli defense minister and politician Moshe Dayan, passed away Friday morning at the age of 103.

Dayan headed the Maskit luxury fashion house and the children's charity organization Variety Israel, and was a noted social activist.

For her activism and charity work, Dayan received several awards and honors, including an honorary doctorate from Ben Gurion University, the Yigal Alon Prize and the Hebrew University of Jerusalem's Solomon Bublick Award.