Why did Trump's impeachment lawyer David Schoen keep putting his hand on his head? 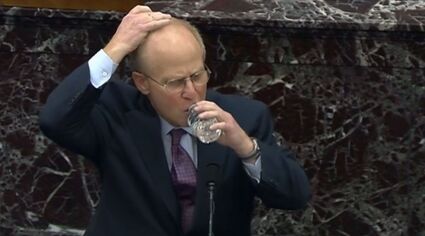 (JTA) - What Donald Trump's lawyer likely wanted: for America to spend this evening talking about how the former president was not responsible for the deadly Jan. 6 raid on the U.S. Capitol.

What he got instead: a firestorm of speculation about why he held his hand over his head every time he took a sip of water.

David Schoen, one of Trump's impeachment lawyers, already asked (and then withdrew his request) for Trump's trial to pause for the Jewish day of rest. Was the fact that he covered his head while drinking also because he is an Orthodox Jew?