Have you seen the Passover Playbook? 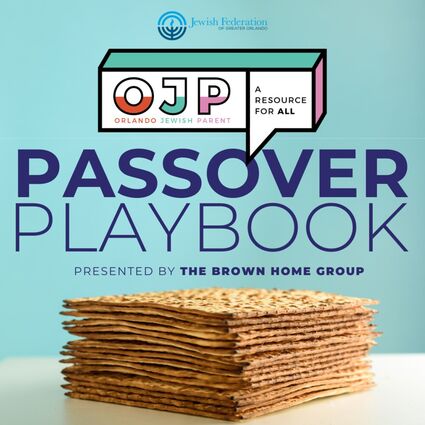 Introducing the "Passover Playbook," brought to the Jewish community by Orlando Jewish Parent. OJP, for short, is a comprehensive program, embraced by the Jewish Federation of Greater Orlando and The Roth Family JCC that will be coming to you in the months and years ahead. It started already with a program called "Passover Madness." The tagline, "Which Passover Food Will Win It All?" (See the ongoing contest at orlandojewishfed.org.) Its newest project is The Passover Playbook.

"Welcome to our House - OJP, Raw, Real and Relatable," is the brainchild of Ashley Bundis of Glitter Sparkle Marketing, in conjunction with the Jewish Federation of Greater Orlando and The Roth Family JCC. It's been sponsored by various Orlando businesses, with the primary sponsorship provided by the Brown Home Group.

Bundis, who is also the Federation's marketing director, understands vividly the new world in which we live today, along with the challenges faced by modern parents and grandparents.

"Data has shown since the PEW study in 2014 that our community is proud to be Jewish and wants to engage. The Passover Playbook provides a guide for them to do that. New times, new trends, new behaviors, new threads, new patterns, new traditions, a new playbook," Bundis said. "Our Jewish lifestyles have changed dramatically, that one could argue that if our methods of teaching don't change, then we are in danger of losing something ... if we haven't lost something already."

"Passover Madness" brings a bit of levity to this Passover season still in the midst of Covid family separation. On the Jewish Federations website you can vote on the Passover foods you like the most or least. It's a fun contest that pits favorit foods against favorite foods; vote on Gefilte Fish vs. Tzimmes or Brisket vs. Chocolate Matzah. The contest is set up like the March Madness betting format, and in the end, we will see what dish wins and where the others rank. It's for people of all ages. It's fun, interactive, and engaging.

"Go online, to our website to see the results! We've had over 600 people actively participating in the contest so far. Not bad for the first time around with little publicity. Six-hundred Jewish people consisting of children, teenagers, parents, and grandparents," said Keith Dvorchik, executive director of the Jewish Federation of Greater Orlando.

The Passover Playbook is also on the website. It's a marvelous digital magazine that has compiled everything you ever wanted to know about Passover, in an interesting easy to read publication.

Passover Playbook content is a collaboration of Beth Rose, Melissa Youngblood, and Bundis. "It's wolfpack mentality all the way. We are a trifecta of modern parent life," Bundis said.

When you open the playbook you'll see eight categories. The first four are Celebrating Passover's Uniqueness, What's Your Haggadah Vibe, 2021 New Traditions, and How to bring new life to your Passover table.

Under "What's Your Haggadah Vibe," the wolfpack has searched high and low and has found six fantastic Haggadah's that you can choose for your seder. Free of charge, other than the ink and paper cost from your printer. Pick one and download the Haggadah of your choosing. Next year, switch it up and select another, or keep the one you printed.

One article addressed under "New Traditions" is titled, "Dry Seders." The opening lines say: "As our social conscience has grown during these past years around issues related to alcoholism and drug abuse, the "Dry Seder" has emerged as an innovative and holy Passover tradition ... In a time we want all to feel welcomed and treasured, not judged and shamed..."

"How to bring life to your Passover seder," suggests interesting ways to liven up your seder. For example: use square matzah as table placemats or write your guests' names in chocolate icing on matzah for place cards.

The other four categories are: For the Foodies, What's in your Ball?, Family and Storytime and Activities, and Soul Care.

There are some great traditional and unconventional recipes in "For the Foodies."

"Family and Storytime and Activities" has great stuff for the family to take advantage of with their children. They've developed "10 Plagues Memory Cards," a fun way to review the Passover story. This fun exercise will help your child learn about the Passover story, will help them in memorization, and will help teach them Hebrew.

In "Under Soul Care" there's an article on "Mindful Time as a Family." One of the suggestions is "Set a Family Holiday Intention." It reads, "Decide as a family what is something you all desire for this special time. Put words to it and sent it out to the universe. Write it down and place it somewhere visible.

OJP has planned to launch its "Reading and Literary Series" this summer. Through the JCC and Federation, OJP will host an author's series, either online or in-person. They have planned social groups and book clubs that will bring people together in the celebration of good books.

And there's so much more to come from Orlando Jewish Parent. OJP, programming, and events will be coming to venues all around Orlando. There will be numerous online events, as well as once the "Covid plague" passes, numerous in-person events.