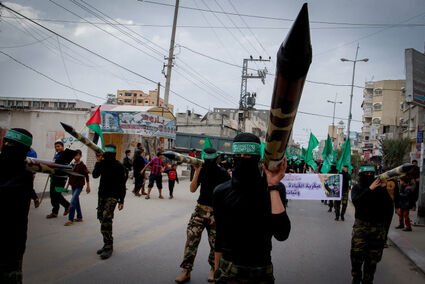 Masked members from the Ezzedine al-Qassam carry a model of a rocket during a rally to commemorate the 27th anniversary of the Islamist movement creation Hamas, at the Nuseirat refugee camp in the Central Gaza Strip on Dec. 12, 2014.

(JNS) - As the truce in Gaza takes hold, Israel and the international community must employ multiple approaches to prevent Hamas and Palestinian Islamic Jihad from once again using a quiet period to rearm themselves, a former Israeli defense official has said.

Col. (res.) Shaul Shay, who served as the deputy head of the National Security Council and is today a senior research fellow at the International Institute for Counter-Terrorism, told JNS on Monday that setting this goal would be a good example of translating military success during the latest escalation.

Until now, the formula in pla...