'AP,' 'Al Jazeera' and the mainstream media are tools in Hamas's war against Israel 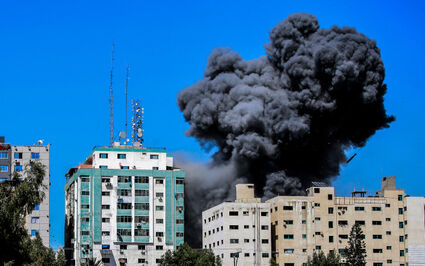 Smoke rising from the Al-Jalaa tower in Gaza after an Israeli airstrike on the building, which housed Hamas operatives and several media outlets, including the "Associated Press" and "Al Jazeera," May 15, 2021.

(JNS) - Journalists are expressing their outrage that the 12-story Al-Jalaa building housing the Gaza headquarters of Associated Press and Al Jazeera was targeted during retaliatory Israeli airstrikes on Saturday.

Al Jazeera Jerusalem bureau chief Walid al-Omari said that by striking the building, Israel was acting "not only to sow destruction and killing, but also to silence those who broadcast it."

Not exactly an objective assessment.

AP CEO Gary Pruitt released a statement expressing that the world's largest news syndication service was "shocked and horrified" by the strike.