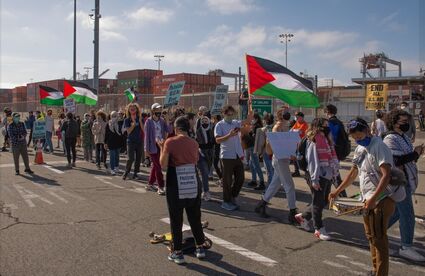 Pro-Palestinian activists protest against the unloading of an Israeli ship at the Port of Oakland, Calif., on June 4, 2021.

(JNS) - Hundreds of anti-Israel protesters prevented the unloading of an Israeli container ship from Asia at the Port of Oakland, Calif., on Friday, with the cooperation of the local longshoremen's union, which refused to unload the vessel.

The protest was sponsored and organized by the Arab Resource and Organizing Center, a pro-Palestinian BDS group operating in the Bay Area.

In a Sunday Facebook post, the group, which claimed "thousands" streamed to the protest throughout Friday, praised International Longshore and Warehouse Union Local 10, which it said had "honored the six simultaneous...