Hundreds rally in Ohio, Arizona against vandalism, Jew-hatred and anti-Semitism 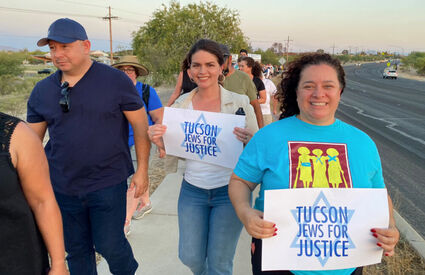 Hundreds marched in Tucson, Ariz. after a wave of anti-Semitic incidents, including Mayor Regina Romero (center) on June 13, 2021.

(JNS) - Groups of Jews and other community members in Arizona and Ohio gathered on Sunday to express their concern over the recent rise in anti-Semitism across the country and around the world.

In Cincinnati, hundreds attended the "Under the Tent, Standing Against Antisemitism" event to stand in solidarity against Jew-hatred in Ohio and elsewhere.

"We join together as Jews and allies to send a strong message that we will not tolerate hate and anti-Semitism in any form," said Gary Greenberg, former past president of the Jewish Federation, who said a university student was assaulted because...