How chutzpah beat death at the peak of Mount Everest 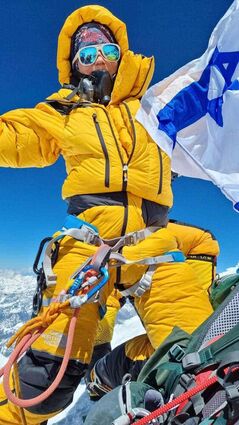 Danielle Wolfson waving the Israeli flag atop Mount Everest, May 2021.

(ISRAEL21c) - Danielle Wolfson's oxygen tank was almost empty as she neared the peak of Mount Everest on May 23.

At such a high altitude and low temperature, she knew she could just sit down and await a quick death. She'd stepped over bodies of previous climbers who'd done exactly that.

"We Israelis are a little aggressive and very creative," Wolfson told ISRAEL21c after becoming the first female Israeli to reach the top of the 8,849-meter (29,032-foot) peak, where she unfurled an Israeli flag.