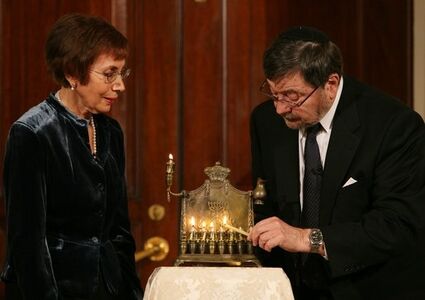 A menorah belonging to the great-grandfather of Daniel Pearl is lit by Judea and Ruth Pearl, his parents, at a Chanukah celebration on Dec. 10, 2007, in the Grand Foyer of the White House in Washington, D.C.

(JNS) - Ruth Pearl, the mother of slain Wall Street Journal journalist Daniel Pearl, died on July 20 at the age of 85.

In 2002, Ruth Pearl and her husband, Judea Pearl, were thrust into international attention after Al-Qaeda terrorists in Pakistan kidnapped their son, Daniel Pearl, and executed him nine days later.

Pearl, an electrical engineer and computer analyst, was born Eveline Rejwan in Baghdad on Nov. 10, 1935. According to the University of Southern California Shoah Foundation news release, her childhood was interrupted in 1941, when a coup attempt in Iraq left a power vacuum in...