Biden and Bennett focus on Iran in first meeting 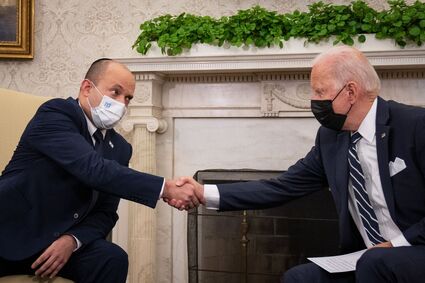 WASHINGTON (JTA) - In his first meeting with Israeli Prime Minister Naftali Bennett, President Joe Biden said that although he prefers diplomatic means to keep Iran from acquiring a nuclear weapon, he is not afraid to "turn to other options" on the issue.

The pledge captured what both men, who are in varying degrees of political precariousness right now, hoped to extract from the meeting: A bigger focus on what they agree on than what they disagree on, and the start of a new era in relations between Israel and U.S. Democrats.

"We're going to put diplomacy first and see where that takes us,"...