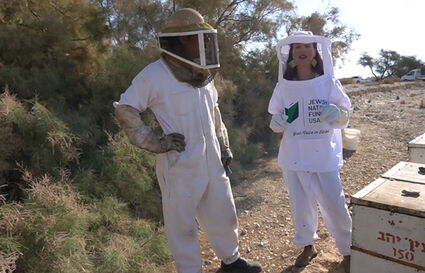 A beekeeper in Israel's Arava Desert explains why Israel's bee colonies are flourishing in the desert.

The Arava Desert in Israel's south is "abuzz" with activity - and it is all thanks to one important six-legged critter: the humble honeybee.

In a world where scientists acknowledge the important role bees play in our ecosystem yet worry about their dwindling numbers, farmers in Israel's Arava Desert are working to grow bee colonies – and they are already achieving some very "sweet" results.

You would not expect to find a bee colony in the middle of a desert, yet the bees at Porat Farm in Ein Yahav, an area supported by Jewish National Fund-USA (JNF-USA), are not only surviving, they're thriving.

Despite its arid moonscape-like environment, the Arava region in Israel's Negev Desert provides the ideal conditions for growing bee colonies. With limited pollution, the air remains pure, which in turn helps prevent many of the diseases that are decimating bee colonies around the world.

And the conditions that help bees thrive in the arid environment are benefiting local farmers as well.

In addition to the variety of delicious honeys that comes from bees, local farmers in the Arava and JNF-USA supported agricultural scientists rely on bees to pollinate their crops. In fact, farmers will rent beehives from beekeepers like Porat and place them in their fields, resulting in more profit for their businesses and better quality fruits and vegetables for Israelis and consumers around the world.

According to Noa Zer, JNF-USA Liaison in the Arava and owner of a two-acre pepper farm, "Without the bees we wouldn't be able to grow what we grow. There would be no source of income. The bees are the best helpers."

There are two types of bees that are being used to help boost local agriculture: the honeybee and the bumblebee. As Dr. Oded Kanan from JNF-USA's R&D center in the Arava explained, honeybees are more commonly used in open greenhouses, whereas the bumblebee is used in closed greenhouses. While the bumblebee does not produce honey, they are still essential for pollination. Bumblebees move their wings hundreds of times per second, and the vibrations from it allows them to pollinate a flower before they move along to the next plant. This process is called "buzz pollination."

This new approach is a major upgrade from previous pollination techniques in the region, when farmers would have to go by themselves, flower by flower, with a special device to pollinate them. Today, thanks to the helpful cooperation of bees and innovative researchers, farmers were able to increase their yield by 60 percent. And today, farms in the Arava are responsible for producing more than half of all of Israel's produce.

Farmers and experts alike agree, it all comes down to cooperation. Whether it be the way bees work together with each other and with the farmers or the way that JNF-USA invests in communities in the Arava, cooperation is key. To attract 500,000 new residents to Israel's south as part of the organization's Blueprint Negev initiative, JNF-USA has invested in a range of projects that create local jobs and opportunities. Accordingly, JNF-USA has invested in R&D facilities, built parks and playground, created medical centers, and supported agriculture schools.

And as JNF-USA continues to support research facilities in the Arava, leading scientists are continuing to make breakthroughs that support global agriculture.

As Dr. Kanan points out, "Without bees there is no world, and this is something scientists everywhere are working on." Communities in other countries, like Nepal, are catching on and adopting the methods that they saw being used in Israel. It modernizes the way food is being grown, helps with economic security, and ultimately has a ripple effect throughout society. It's what farmers like Zer call, "the bee effect." By helping Israel's desert bloom, these little bees, with the help of local farmers and JNF-USA, are making a big impact. And that's something that is pretty sweet and worth celebrating this year!

This is a Paid Post from the Jewish National Fund-USA, which ensures a strong, secure, and prosperous future for the land and people of Israel, and Jewish people everywhere.

This is a paid post. JTA's editorial team had no role in its production.