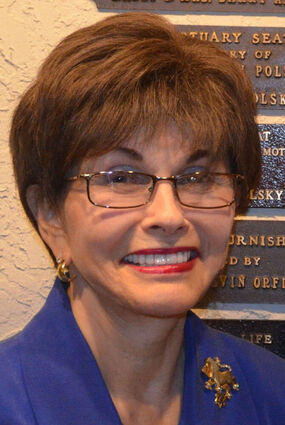 Gloria Max, the driving force behind the annual drive to provide school supplies to thousands of students in Volusia and Flagler counties as well as the Jerry Doliner Food Bank, died last Friday afternoon after a six-year battle with cancer.

She was just a few days shy of her 81st birthday.

Max was the longtime executive director of the Jewish Federation of Volusia & Flagler Counties, where she and her husband Ray also ran the federation's food bank and started an annual Operation Backpack program.

"Helping others was something she championed. It became a way of life for her," said Marvin Miller, the federation's board president, of Max.

Max was honored in 2020 by The Daytona Beach News-Journal as the Volusia-Flagler area's "Most Influential Woman of the Year" because of her tireless efforts to help those in need.

"Losing Gloria Max is a tremendous loss," said Forough Hosseini, founder and chair of another area nonprofit called Food Brings Hope. "She worked day in and day out 365 days a year for the betterment of our community. She's irreplaceable."

Max was admitted to the Halifax Health Hospice center in Ormond Beach a week and a half before she died late Friday afternoon, confirmed her daughter, Jackie Miller, who is not related to Marvin.

"She continued to work and try to find ways to help others throughout her battle with cancer," said Jackie Miller. "She was at Halifax Hospital when Hurricane Ida came through (Aug. 26-Sept. 4) and was calling people to try to raise money for the hurricane victims."

Max was diagnosed six years ago with stage 4 peritoneal cancer, a rare form of cancer that resembles ovarian cancer but can afflict even those who have had their ovaries removed.

Max was told she might only have five years at the most, but outlasted that forecast, said Janice Sumner, Max's longtime assistant at the federation.

Jackie Miller said her mother's oncologist, Dr. Richard Weis at Halifax Health, "did a great job" in treating Max, "knowing that she would continue wanting to work up until the end."

Max grew up in Toronto, Canada, and met her husband, who was from Charlottesville, West Virginia, when they became pen pals.

After they got married, they ran a business in Charlottesville called Ray's Deli for many years. Their daughter Jackie Miller said she grew up helping out at the deli where her father was "the kitchen mastermind" while her mom oversaw business operations. "We all pitched in to do everything," she added.

When the couple sold their deli in the early 1980s, they moved to Ormond Beach. In 1995, Max became executive director of the Jewish Federation, which took over operations at the Jerry Doliner Food Bank as part of the social service outreach program of their synagogue, Bethel Temple in Ormond Beach.

Jackie Miller, who lives in Port Orange with her husband Mark, said her mom got the idea to start the annual Operation Backpack program when her children began attending elementary school. "Mom noticed that some of the kids there didn't have school supplies," she recalled.

Marvin Miller said Max made the case to the federation to start the annual school supply kits drive. "She felt bad that she was feeding families whose kids didn't have school supplies," he said.

The food bank provides bags of groceries to more than 200 families each week.

Sumner said she will take over running the food bank as well as sending out mailings for both that program and Operation Backpack.

Sumner described Max as "a real go-getter and a fighter, someone you'd want on your side."

While Max earned a salary for serving as the federation's executive director, she was a "tireless worker" who put in countless hours more than she was paid for and typically worked seven days a week, sometimes well into the evening hours, said Sumner.

And at her side every step of the way was her husband, who was an unpaid volunteer who managed the federation's warehouse and oversaw the other volunteers. "He was the chief volunteer," said Sumner.

Jackie Miller said her mom "was very good at schmoozing and organizing and getting people to donate or become a volunteer. Dad did a lot of the lifting. He was a behind-the-scenes worker. They were always side by side."

Ray Max was recently admitted to an assisted living facility.

Mark Miller said he recently began helping to sort out papers at his mother-in-law's office at the federation where he was surprised to find boxes of thank-you letters and cards she had received over the years.

"She saved every thank you from every person she ever got," he said. "It meant a lot to her."

Max's family is requesting that donations be made in Max's honor to either the Jerry Doliner Food Bank or Operation Backpack. Checks should be made out to the Jewish Federation of Volusia & Flagler Counties with a note in the memo portion of the check stating either "food bank" or "backpacks." The federation's office and mailing address is 470 Andalusia Ave., Ormond Beach, FL 32174. The federation is a 501(c)3 nonprofit organization.

This article originally appeared on The Daytona Beach News-Journal.