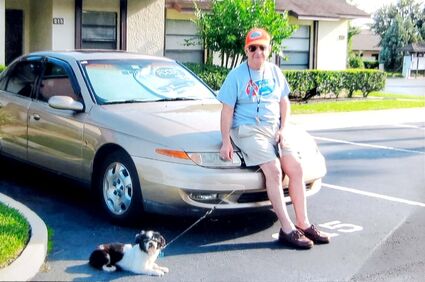 Cliff was born on July 5, 1944 and was a long time Central Florida resident. He attended and graduated Edgewater High School in 1962. Cliff worked for many years at WFTV Channel 9 and other television stations during his lifetime before finally retiring from Grainger in Atlanta, GA.

He was heavily involved with Easter Seals many years ago, as well was a regular blood donor, reaching significant milestone levels of donations over his lifetime. Cliff had many interests, including photography, cinema and the outdoors. His kind heart and loving nature drew him to animals in need. That is what brought both Snip and Chester into his life.

Cliff is survived by his daughters, Jessica Berrocales (Poli) and Mara Bradbury (Jim), his grandchildren, Bryce, Jordan, Victoria, Jackson and Zachary, and his sister Hilary Pine-Cruz (Louis). He was predeceased by his parents, Howard and Rita Pine and younger brother Saule.

Due to COVID and time constraints, a memorial will be planned in the future.

In lieu of flowers, the family requests donations to be made to New Hope Animal Shelter, 800 Humane Society Road Deland, Florida 32720 or a charity of your choice.