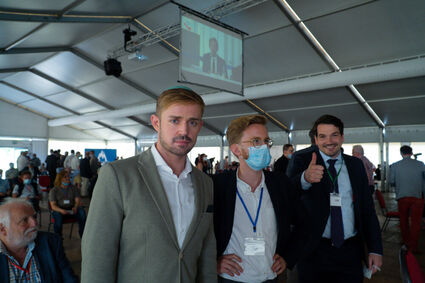 Marcel Goldhammer (l) Julian Potthast and Robert Eschricht attend a political event of the Alternative for Germany party in Berlin, Germany on June 14, 2021.

(JTA) – At a political rally in Berlin in June, a young Jewish gay man wearing a turquoise kippah launched his campaign to represent one of Germany's most ethnically diverse constituencies in parliament.

The man, 34-year-old Marcel Yaron Goldhammer, promised to stoke the "embers of unity, justice and freedom" during his announcement speech in front of about 200 people in the southeastern Berlin neighborhood of Neukolln.

But he's not running for a liberal party, or one promoting multiculturalism.

Goldhammer, a dual German-Israeli citizen and a former soldier in the Israel Defense Forces, i...