Some Jewish Republicans have Trump fatigue, but they just can't quit him 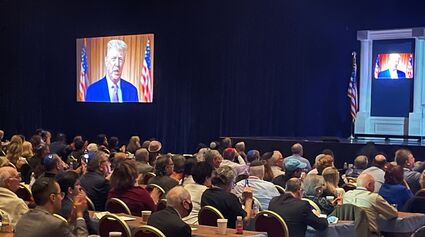 Republican Jewish Coalition members listen to a prerecorded video from Donald Trump, in the Venetian resort in Las Vegas, Nov. 6, 2021.

LAS VEGAS (JTA) - The Republican Jewish Coalition conference was about 2022, and also 2024. It was about how a near Republican sweep in state and local races last week revealed a way back to GOP control of the federal government. It was about moving more Jews from D to R.

What the conference this weekend was not about, the organizers wanted you to know, was Donald Trump.

"It's about the here and now, it's not about President Trump or anybody else," Ari Fleischer, an RJC board member, told reporters on Saturday, the second day of the RJC confab.

Except it was very much about Donald Trump, wh...