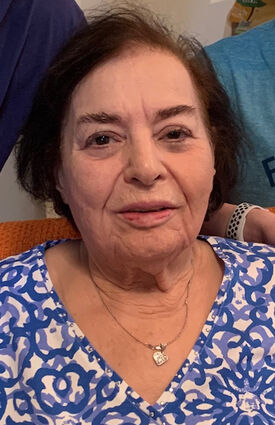 Elisheva Pinhas Zeira, 86, passed away peacefully on Tuesday, Nov. 9, 202, in Boca Raton, Fla., with her daughter, Dr. Shelly Fenton-Zeira, by her side.

She graduated Gymnasia Herzeliah High School in 1953 in Tel Aviv and then went on to nursing school in Israel. She served in the Israeli Defense Force in the Armored Corps from 1953-1955. In 1960, she married Yuval Zeira and they immigrated to the New York City area to pursue further studies. She received a dual bachelor's degree in psychology and nursing in 1971 from Queens College in New York. In 1973 she received her master's from NYU in counseling and further studied psychotherapy. She enjoyed a lifelong career as a psychotherapist at Mt. Sinai and Lenox Hill Hospitals in New York City. She retired in Boca Raton in 2000.

She is survived by her daughter, Dr. Shelly Fenton-Zeira (Dr. Kimberly), grandmother of Gabriel, Zachary and Ariella; as well as her siblings, Ayala, Ilana, and Yigal in Israel; and a tribe of cousins - Dr. Yehiel, Avigail, Drora, Ofra, and Danny Meghory in Toronto. She is predeceased by her brother, Ami Pinhas, z"l, and Aunt Sarah Meghory, z"l, in Toronto.

Contributions in memory of Elisheva Pinhas Zeira may be made to Congregation Ohev Shalom and the American Diabetes Association.