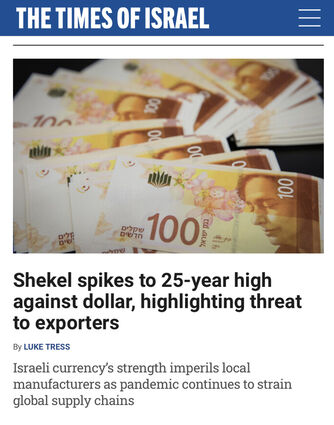 Two seemingly parallel and completely unrelated things happened this week with an astonishing response. Running a nonprofit, the end of the year is an opportunity to tie up loose ends and be sure that in the last weeks of the year, the level of financial support is at least maintained. While planning some traditional year-end appeals on behalf of the Genesis 123 Foundation, I realized that Israel was in a bit of a crisis, with my organization and many others facing a financial deficit.

In parallel, I received requests from people who read my articles to write more about personal things in Israel. Not that the politics and regional diplomatic issues surrounding Israel are not important, but people want to know more about day-to-day aspects of life on the ground here.

One thing I always try to do in building bridges between Jews and Christians with Israel is to avoid making shrill claims, or turn to donors only to ask for financial support. Relationships matter. I try to underscore that. The funds we receive are used judiciously to make the biggest impact possible. So, I told my donors that their support is welcome, and we need it. But we also value prayers and building relationships that make meaningful connections to Israel, first and foremost. For me it's a sacred trust. On the opposite side, for years I have personally called out what I see as the trend among many "to objectify Christians as a faith-based ATM," just to get money out without doing more than entering a PIN code.

Back to my fund-raising letter. I wrote, "I was compelled to reach out to you based on a news item on TV as I drank my coffee this morning. The good news is that the Israeli shekel is a strong currency. It's reflective of many factors including overall trust in the economy and leadership. The bad news is that by comparison, the dollar and most major other currencies are much weaker, and the exchange rate is shrinking to all-time lows. As a result, Israel and Israeli charitable organizations are suffering a bit of a sustained crisis making ends meet."

The sharing of a real-life situation that impacts millions, not making brash hard-to-believe claims, and one that's not in the news anywhere outside Israel, came across as very refreshing. It's a stretch to liken the challenges facing Israel nationally from this on a scale of a war from our enemies. But it is a national challenge of great magnitude, impacting millions of Israelis of all backgrounds.

Here's the best way to understand it tangibly: Not that long ago, $100 was worth 390 shekels. Fifteen years ago, it was worth as much as 440 shekels. Today, because of the weakening dollar, the official rate is just 310 shekels, before bank fees. Recently, I sent a wire transfer from the Genesis 123 Foundation U.S. account to pay an invoice in Israel, and the equivalent $100 value was just above 300 shekels.

Basically, over just a few years when many in Israel were devastated by the pandemic, we've seen a 20 percent drop in the value of the dollar. Other currencies are similar. For Israeli organizations like mine, providing services and paying bills in shekels, but raising money in dollars, we're on the verge of a major shortfall even by raising the same amount of money.

I'm not a prophet. I have just looked ahead, trying to be prepared. Of course, it's not just my organization that faces this challenge, but everyone who raises funds in dollars or other foreign currencies. Organizations like these, serving millions and blessing Israelis of all backgrounds from Holocaust survivors to terror victims, widows and orphans, social welfare for soldiers, security services, feeding the hungry, supporting new immigrants, and of course building bridges between Jews and Christians, are all facing the same challenge.

Now that you know about how these seemingly parallel but clearly related phenomena, let me share another that will blow you away. In 2016 it was reported that since 2008, Israel had been actively engaged in propping up the dollar and other currencies, boosting its foreign currency reserves by some $70 billion, to $96.5 billion. Economists will understand that by buying foreign currencies, one can manipulate the exchange rate in such a way that is mutually advantageous.

However, recently, as the dollar has been spiraling downward, the Bank of Israel has said it has no intention to continue doing that. It's ironic to think of Israel helping to prop up the U.S. dollar, but that's been going on for years. Maybe the dollar is not such a good investment after all. Now however, as the dollar drops, Israelis are suffering too. It impacts tourism which is just coming back, trade, and of course nonprofits.

As much as I am not a prophet, I hate to be a prophet of doom. However, the crisis is real and there's no end in sight. I invited my donors to join us. Many responded generously. "Helping us to help others just to cover costs," is not the most slick or glamorous campaign appeal. But it's sincere, and born in a real economic need as a consequence of a global financial situation where the trickle down is felt here widely.

Living and serving in Israel is always a blessing, but it's not always easy. When I say that I try to help give people overseas a window to peek into to see what life is like in Israel. But when you peek into the offices of nonprofits across the country now, don't be surprised if you see a little more stress.