Six ancient findings in the footsteps of the Maccabees 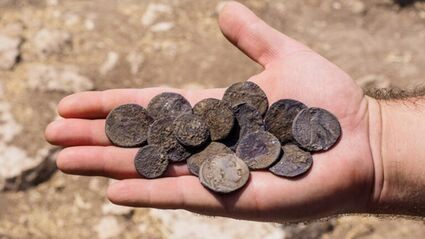 A cache of silver coins found in the ruins of a Hasmonean estate house. Photo by Assaf Peretz, courtesy of Israel Antiquities Authority.

(Israel21c via JNS) - Just in time for Chanukah, Israeli archeologists have uncovered new evidence of the long battle between Hellenists and Hasmoneans in the holy land.

Chanukah celebrates the 164 BCE victory of an army, led by a father and sons known as the Maccabees, over Hellenist (Seleucid) conquerors who'd outlawed Jewish practices and defiled the Temple in Jerusalem.

In the years after the Maccabees purified and rededicated the Temple, battles against the Seleucids continued under Maccabee descendants as they established the Hasmonean dynasty.

And now archeologists have unearthed a...