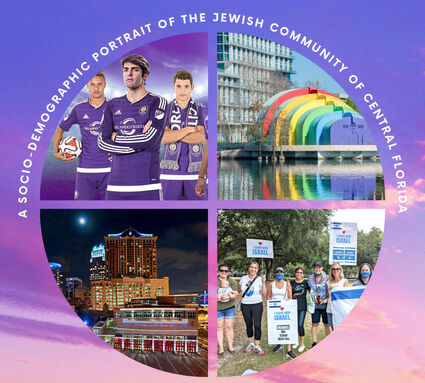 The Jewish Federation of Greater Orlando held meetings Dec. 12 and Dec. 13 (at the Roth Family JCC and Rosen JCC, respectively) to discuss the results of the community study, conducted by the Cohen Center for Modern Jewish Studies at Brandeis University with the assistance of UNH Survey Center.

The last study was done in 1993 – 28 years ago, and a lot has changed! There are 51,400 Jewish people (41,700 adults and 9,700 children) living in 25,500 Jewish households in Central Florida. In addition to population, topics covered in the 20-page summary include intermarriage; religion, engagement; Israel; antisemitism; and health, finances and education. The full report covers all of these topics in detail. Both reports are available on the Jewish Federation of Greater Orlando website.

At the conclusion of the survey, there are several recommendations for the community:

• Reach beyond the historic geographic core of the community

Ninety-nine percent of children in inmarried families are being raised Jewish. Overall, 71 percent of all children in Jewish households are being raised Jewish. Discussion was held at the Roth JCC meeting as to what “Jewish” meant. There was no clear definition. However, the survey shows that 42 percent light Shabbat candles; 38 percent hosted or attended a Shabbat meal; 98 percent light Chanukah candles; 66 percent attend a Passover seder in a typical year; 37 percent attend High Holidays in a typical year; and five percent keep a kosher home.

• Be sensitive to differences in backgrounds

Jewish demographics in the community include 5 percent Israeli citizens; 15 percent Hispanic, Latino or person of color; and 7 percent LGBTQ.

• Assist families and individuals in need

This is just the “tip of the iceberg” as to all that the survey encompasses. It is available to everyone through the Jewish Federation of Greater Orlando. Visit the website at orlandofederation.org or call 407-645-5933, ext. 236.