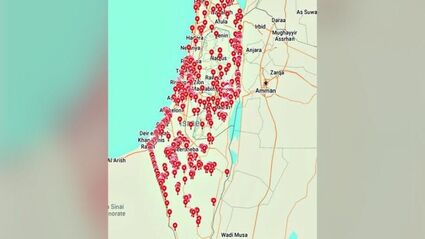 The map of Israeli targets published by "The Tehran Times" includes nearly every populated part of the country, Source: www.mehrnews.com.

(Israel Hayom via JNS) - "An intensification of Israeli military threats against Iran seems to suggest that the Zionist regime has forgotten that Iran is more than capable of hitting them from anywhere," began an article published Tuesday in the Tehran Times, a newspaper identified with the Iranian regime.

The article ran under the headline "Just One Wrong Move!" and featured a "map of Israeli targets," which showed nearly every populated community in the country labeled with a red dot.