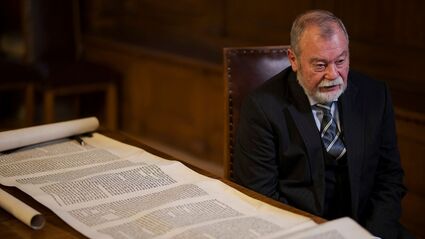 Uwe Mader with the Torah scroll fragments he handed over to the city of Görlitz, Thursday, Dec. 16, 2021.

BERLIN (JTA) - A German Protestant minister has handed over segments of a long lost Torah scroll to the city of Görlitz in southeast Germany, 83 years after his father, a town policeman, came into possession of them.

While it is not unheard of for German non-Jews to turn over religious objects that have been lost or hidden since the Nazi period, the Torah scroll fragments took an unusually circuitous journey before coming to light last week.

The Torah had not been seen since Kristallnacht, the pogrom against synagogues and Jewish property in German-speaking lands on Nov. 9 and 10, 1938...