Matzah at the International Space Station 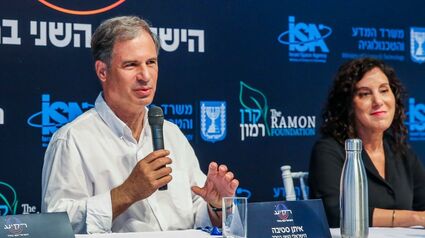 Eytan Stibbe, the second Israeli astronaut to launch into space, seen during a press conference in Tel Aviv, May 5, 2021.

(JTA) - An Israeli astronaut made a decidedly low-tech delivery to the International Space Station: handmade matzah.

Eytan Stibbe, 64, is one of three astronauts who paid for the privilege of launching into space on April 8, in an initiative of Axiom Space, a private company based in Houston.

Chabad of the Space and Treasure Coasts in Florida delivered Stibbe a Passover food package, noting that he would be on the space station when Passover started on the evening of April 15, Chabad.org reported.

Stibbe explained the significance of the holiday in a Zoom press conference.