Estelle Harris, actress who played George's mother on 'Seinfeld,' has died at 93 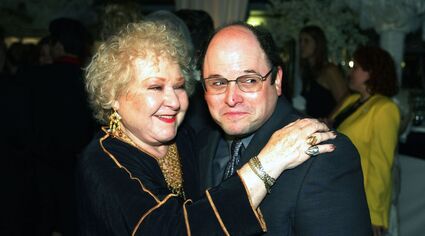 Estelle Harris and Jason Alexander greet each other at the after-party for "The Producers" at the Hollywood Palladium in Los Angeles, May 29, 2003.

(JTA) - Estelle Harris, the Jewish actress who played George Costanza's mother on the sitcom "Seinfeld," died Saturday at the age of 93.

Harris played the role of Estelle Costanza, the always shrill and frequently apoplectic mother to George Costanza, on the sitcom from 1992 until the show's finale in 1998. According to Deadline, the character of George's mother was named Estelle before Harris landed the part - but her name wasn't the only thing Harris shared with her onscreen character.

"I'm not that different from Estelle Costanza," Harris told the Chicago Tribune in 1995, at the height o...