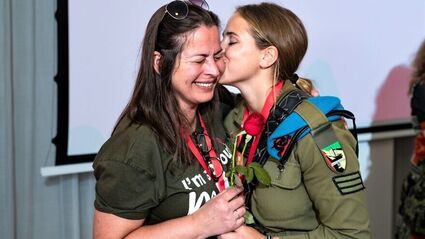 The mother of a lone soldier reunites with her daughter, who currently serves in the Israel Defense Forces, during a trip with the global movement Momentum at an event hosted by Nefesh B'Nefesh in Jerusalem on July 8, 2022.

(JNS) - Thirty-five mothers of lone soldiers currently in Israel on a special trip with the Momentum organization thought they were attending an educational seminar at the new Nefesh B'Nefesh Campus in Jerusalem on June 8 when they were surprised by their children serving in the Israel Defense Forces.

The mothers, many of whom hadn't seen their sons or daughters since last year, arrived in Israel on July 4 from all over the world, including the United States, Canada, Argentina, Australia, Mexico and South Africa. They came to Israel thanks to Momentum, a global movement that helps women con...