Sculpture captures the passion of the Jewish Nakba 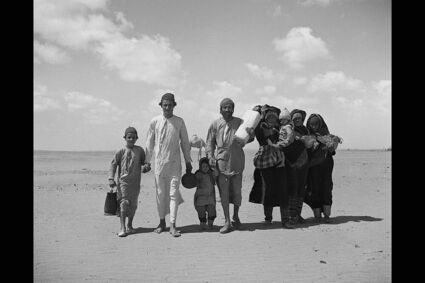 The original photograph that was the model for the sculpture on display in Jerusalem. The names of the people in the photo, from left to right,as described by Avichai Cohen, are: Ezra Gafni (Zviv), my uncle, who today lives in Binyamina; Zecharia Zviv, z"l, my uncle, who lived in Kfar Saba, whose children can share his story; my aunt Yona Bura (Zviv), who today lives in Petach Tikva; My grandfather, Chaim, Z'l, who is holding the Torah and lived in Binyamina; Grandmother Sada (Mazal), z"l, holding baby Rachamim Gefen (Zviv) who lives in Haifa; The women at the far left are my mother's sister, Shoshana Klaf (Evron) and their mother Lulva D'Hari (my great grandmother.)

Jerry Klinger, president and founder of the Jewish American Society for Historic Preservation, contacted the Heritage after reading the article "Podcast series 'The Forgotten Exodus' tells overlooked stories of Jews from Arab Lands" published in the Aug. 5 issue of Heritage. He wanted to share about a sculpture on display outdoors at the Sephardi Memorial in Jerusalem that was created by noted Jerusalem sculptor Sam Philipe from a picture of a family literally walking across barren land to Israel from Yemen.

Klinger also sent a portion of an email he received from Avichai Cohen, whose mothe...