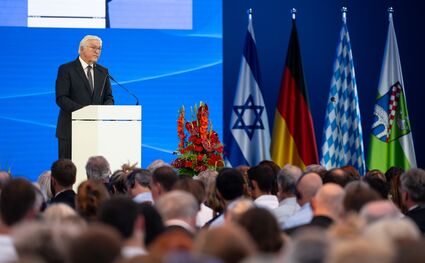 German President Frank-Walter Steinmeier speaks at a commemoration ceremony to mark the 50th anniversary of the attack on Israeli athletes at the 1972 Munich Olympics.

(JTA) - At a ceremony held on the air base where 11 Israeli athletes and coaches were murdered during the 1972 Munich Olympics, German officials apologized for the "lack of protection" that led to the tragedy and agreed to establish a joint research commission to look more deeply into the events surrounding the terror attack.

"We cannot make amends for what has happened," said German President Frank-Walter Steinmeier on Monday. "I ask you, as the head of state of this country and on behalf of the Federal Republic of Germany, for forgiveness for the lack of protection of the Israeli athletes...