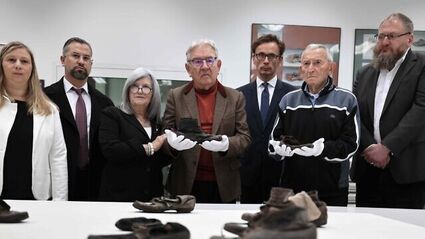 Auschwitz survivors Arie Pinsker (left center), and Bogdan Barnikowski, (right center) hold the shoes of child victims of the Nazis in the Conservation Lab in Auschwitz, joined by representatives of March of the Living, the Neishlos Foundation, and the Auschwitz-Birkenau Foundation.

Around 8,000 children's shoes found at Auschwitz are rapidly disintegrating and require immediate conservation so they can be retained as historic documentation, the Foundation said. The conservation project, called "From Soul to Sole," will continue for two years. A global fundraising campaign has...