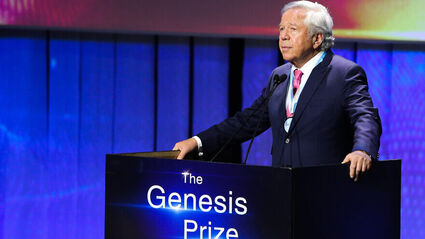 (JNS) - Robert Kraft, the owner of the New England Patriots football team, and his family are set to receive a national leadership award on Tuesday for their support of the U.S. Holocaust Memorial Museum. The award will be presented during the museum's "What you do matters" 2022 Northeast Tribute Dinner.

The honor comes just days after a TV ad urging Americans to stand up against Jew-hatred aired during Sunday's NFL game between the Patriots and the New York Jets. The ad was sponsored by the Foundation to Combat Antisemitism, which Kraft founded in 2019 to address the threat anti-Semitism...