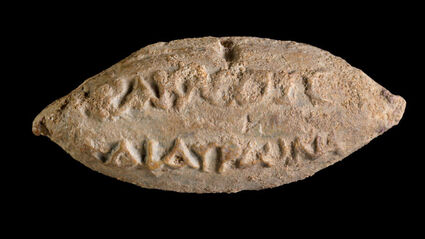 The 1.7-inch sling bullet is made of lead and dates to the time of the Hasmonean dynasty.

(JNS) - Israeli researchers recently discovered a lead projectile dating from the Hellenistic period in the ancient palace at Yavne, an archaeological site in central Israel.

The 4.4 centimeter (1.7 inch) long projectile was designed to be launched from a sling. It is estimated to be 2,200 years old, placing it at the time of the battles between the Hasmoneans and the Seleucid Empire.

The story of Hanukkah, celebrated this year between Dec. 18-26, commemorates the recapture of Jerusalem from the Seleucids in the second century B.C.E.

"It seems that we will not be able to know for sure if th...