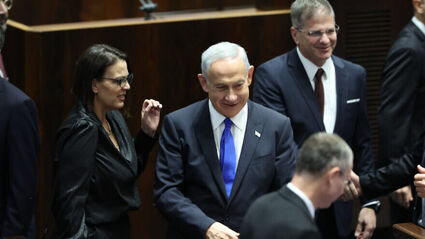 Israeli Prime Minister Benjamin Netanyahu at the swearing-in ceremony of the new Israeli government, at the Knesset, on Dec. 29, 2022.

(JNS) - Israel inducted a historic right-wing government Thursday, led by three-time Prime Minister Benjamin Netanyahu. Netanyahu's return to power and the formation of a strong right-wing government is a tremendous achievement for a nation that has increasingly turned towards the right-wing values of strong security and protecting the Jewish character of the state.

The 64-member Likud-led coalition, joined by Netanyahu's loyal right-wing and religious allies, puts to bed years of electoral instability wrought by politicians who attempted to will Israel's longest-serving prime minister out...