Jerusalem's Pool of Siloam to be excavated, opened to the public 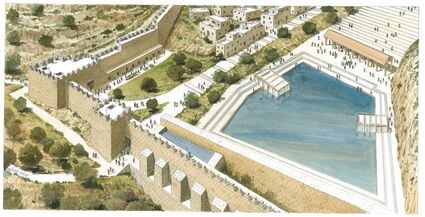 A rendering of the Pool of Siloam in the Second Temple Period.

(JNS) - An ancient Jerusalem pool that was used by millions of Jewish pilgrims during the time of the Second Temple two millennia ago as a ritual bath before ascending the Temple Mount, and revered by Christians as the site where Jesus cured a blind man, will be fully excavated and then opened to the public, the Israel Antiquities Authority announced on Tuesday.

The Pool of Siloam, located in the southern portion of the City of David, the ancient epicenter of Jerusalem, and just outside the Old City walls is expected to become one of the most important historic and tourist sites in the cit...