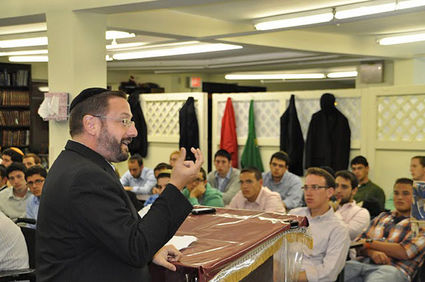 The surprise of Israel’s 2013 election was the rapid ascendance of the new Yesh Atid (There is a Future) party, led by former television celebrity Yair Lapid, at the expense of Israel’s known political entities. The party surpassed all polling estimates to be come the nation’s second-most powerful party in Israel’s 19th Knesset.

With 19 out of 120 parliamentary seats, Yesh Atid is in prime position to dictate many of the terms of Israel’s next ruling coalition, to be led by re-elected Prime Minister Benjamin Netanyahu.

The surprising rise of a fresh party is highly indicative of a disenfranchised electorate searching for leaders that are better in touch with the issues important to the general populous. One of the new leaders emerging from the election is incoming Yesh Atid Member of Knesset (MK) Rabbi Dov Lipman, an American-born Orthodox rabbi and longtime Jewish educator living in Beit Shemesh.

“For the last decade, sectoral divisions within our population have been fighting against one another and dividing our country,” Lipman, 41, said in an interview with JNS.org. “We’ve been fighting between right and left, between religious and secular, and we’ve kind of lost our way.”

Netanyahu’s Likud party, running together with the Russian-centric Yisrael Beitenu (Israel Our Home) party, won 31 seats to secure re-election. The total of those two parties, however, was 11 seats lower than the 42 seats the two parties held in the outgoing Knesset.

Similarly, the once-ruling Kadima party, which had 28 seats in the outgoing parliament, plummeted to near non-existence, and barely crossed the minimum election threshold with only two mandates.

Many of the votes went instead to Yesh Atid, despite the fact that the party is unproven.  All 19 incoming Yesh Atid Knesset members are new to the parliamentary ranks, an anomaly in Israeli politics.

MK Lipman rose to prominence this past summer while leading protests against ultra-Orthodox intimidation. That attracted Lapid, known to be a staunch secularist.

“When I first learned about the party, I heard that Yair must be anti-this and anti-that, particularly with regards to religion,” Lipman said. “But here is a secular individual who is willing to work together with religious communities to set aside sectarian concerns.”

Atop the Yesh Atid platform are socioeconomic issues, which include reducing the soaring prices of housing—particularly for young families, first time homeowners and IDF veterans—breaking entrenched monopolies that dominate Israel’s economy, and creating an equal burden of military service for all Israeli citizens including Israeli Arabs and Ultra-Orthodox groups.

“It is clear that the old politics, based on sectarian self-interests are failing the country,” Lipman said. “We believe our party can be a unifier. The unity we will generate will bring Israel to a whole new place.”

The challenge now will be for the party to meet the nation’s newly granted expectations, by effectively working to effect change from within the nation’s primary legislative body—the Knesset—where not a single party member has any experience.

“We are capitalists with a proud connection to the land,” Lipman said. “We believe we can forge a very good partnership with the Prime Minister, who generally seems to be on the right track.”

With the likely inclusion of Yesh Atid in Netanyahu’s ruling coalition, the government may shift further toward the left than many pollsters had predicted prior to the election.  On the security front, Yesh Atid is in favor of restarting negotiations with the Palestinians toward a two-state solution.  And the Yesh Atid wants at least one other left-wing party to sit in the government.

Yet Lapid’s approach to peacemaking is met with a dose of reality. Lapid has been quoted as stating that Palestinian Authority leader Mahmoud Abbas “is a fraud,” and that any negotiations could be carried out “in a state of total mistrust.”

The party’s platform calls for Jerusalem to always remain united as the capital of Israel, allows for natural expansion of settlements, for retaining settlement blocs in any negotiated settlement, and for Israel to fight terror as necessary, even during negotiations—all caveats that the Palestinian Authority is unlikely to accept.

“I wanted to know where he stood on religion, on God and on the Land of Israel,” he said. “And I saw that we would be able to work together.”

Lipman is one of two rabbis on the Yesh Atid parliamentary list. Lapid is the son of the staunchly secular Tommy Lapid—also a television celebrity—who guided the anti-religious Shinui party from zero to 15 mandates in 2003.

Three years later, the Shinui party failed to cross the Knesset threshold. The elder Lapid passed away in 2008, and his son Yair shares many of his father’s principles.

While the Yesh Atid party seeks to be much more inclusive of all societal elements than the Shinui party, the challenge is whether the younger Lapid can have sustained parliamentary success unlike his father.

“My personal agenda is to restore core Jewish values, and Jewish pride to Israel including more Zionism on the secular side, increased Aliyah (immigration) to Israel, to help with absorption, to distance politics from corruption, to bring Kiddush Hashem (sanctification of God’s name) into government, to bring God into our political and social discourse, and to loyally serve the people of Israel,” Lipman said.

“Most of all, I just want to stay the same old Dov,” he said.

Lipman said his own personal story “is the biggest proof that Israel is a land of miracles.”

“I made aliyah from the United States eight years ago, and now I am entering the Knesset,” he said. “I am playing a role in shaping the future of our country.”

“Israel is the future of the Jewish people,” Lipman added. “To anybody who ever considered making aliyah, even if you think you can’t make it, you can. You can be part of it, and you can make a difference.”