Can Israel move toward the 'one-state solution' in the Trump era? 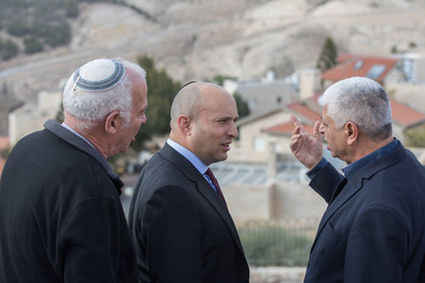 In the aftermath of Secretary of State John Kerry's recent speech defending the United Nations Security Council resolution against Israeli settlements and the Obama administration's refusal to veto the resolution, Israeli political figures are increasingly mulling the idea of annexing the West Bank and implementing a "one-state solution" during the incoming Donald Trump era.

"The U.N. resolution destroyed any residual chance there might have been to achieve peace with the PLO (Palestine Liberation Organization)," Caroline Glick, an influential Israeli-American columnist and senior contributing editor of the Jerusalem Post, told JNS.org.

"Now they (the Palestinians) have nothing to negotiate about, so they won't-although I would argue that they wouldn't have been willing to negotiate anyway," said Glick, the author of 2014 book "The Israeli Solution: A One-State Plan for Peace in the Middle East."

Israeli Education Minister Naftali Bennett, leader of the nationalist Jewish Home political party, has advocated for a Knesset bill to be introduced after Trump takes office Jan. 20 calling for Israel's annexation of Ma'ale Adumim, a suburb located east of Jerusalem in the West Bank. Bennet sees this as a first step in annexing all of Area C in the West Bank. Under the Oslo II Accord, Israel has full civil and security control over Area C, compared to the full Palestinian Authority (PA) control of Area A and split Israeli-Palestinian control of Area B.

In November, Bennett said he believed Trump's victory was "an opportunity" to finally abandon a "two-state solution" to the Israeli-Palestinian conflict.

"Trump's victory is an opportunity for Israel to immediately retract the notion of a Palestinian state in the center of the country, which would hurt our security and just cause," he said, adding, "This is the position of the president-elect, as written in his platform, and it should be our policy, plain and simple."

Israeli Prime Minister Benjamin Netanyahu has repeatedly said that he supports the establishment of a demilitarized Palestinian state that recognizes a Jewish state of Israel. Critics of a "two-state solution" to the conflict, however, note that the proposal is unrealistic because the Palestinians are unlikely to meet those conditions in the foreseeable future.

Glick told JNS.org that Israel now faces two questions: "The first is what to do with the PLO regime in Judea and Samaria (the Israeli government's biblical term for the West Bank). The second is how to administer the area."

"How Israel answers the first-now that it is clear that the PLO is not moderate and not a peace partner, but Israel's enemy-will have implications for the second," she said. "But make no mistake, the discussion is now what to do in the absence of a 'two-state solution,' not how to achieve a 'two-state solution.'"

Demographic expert Yoram Ettinger, former minister for congressional affairs at Israel's Embassy in Washington, D.C., dismissed the common concern expressed by "two-state solution" proponents that a "one-state solution" would jeopardize the Jewish character of Israel due to the Arab birthrate. Ettinger downplayed the latest statistics released by the Palestinian Central Bureau of Statistics, which claimed in a report titled "Palestinians at the end of 2016" that there are 2.97 million Palestinians in the West Bank and 4.88 million in the "state of Palestine."

Ettinger, a member of the American-Israel Demographic Research Group, argued that the most accurate demographic research suggests Jews "make up 66 percent of the population in Israel and Judea and Samaria."

"There is an unprecedented tailwind in the birthrates for Jews compared to the Muslim world as a whole, and Arabs in Israel in particular," he told JNS.org. Arabs in Israel and the disputed territories, he said, "are becoming Westernized in a speedy manner and their fertility rates are dropping."

Ettinger shared the American-Israel Demographic Research Group statistics from May 2016, documenting that the real number of Arabs in the West Bank is around 1.75 million, not the 2.97 cited by the Palestinian research. The statistics favored by Ettinger make up for this gap by citing factors such as the migration of more than 400,000 Arabs, mostly from the West Bank, who have lived for more than a year outside of the territory but are still counted in the Palestinian census.

According to Ettinger, another 300,000 Arabs living in Jerusalem are double-counted-as Israeli Arabs by Israel's census and as West Bank Arabs by the PA census. More than 100,000 Palestinians have married Israeli Arabs and received citizenship, and are also double-counted, he said.

Ettinger also argued that a Palestinian state would be a severe security risk for Israel, noting that the Palestinians have been violently and ruthlessly opposing the presence of Jews in Israel since before the Jewish state gained independence in 1948. Further, the former Israeli diplomat predicted that the establishment of a Palestinian state would lead to unrest in Jordan, as ethnic Palestinians would destabilize the country, and perhaps even in Saudi Arabia, dealing a blow to U.S. interests in the region.

How would a West Bank annexation bill fare in the Israeli legislature? Eli Hazan-director of communications and international relations for Israel's ruling Likud party-told JNS.org that Israeli politics are very dynamic and that certain legislation can be popular one day, then fall out of favor the next day.

"No doubt the Trump phenomenon is raising hopes and expectations on the right regarding government policy in Judea and Samaria," Hazan said. Asked if he sees the "one-state solution" or an annexation measure passing in the Knesset, he responded, "I think the status quo will continue despite all the talk."

Regarding whether or not Trump could help push forward a "one-state solution" policy, Hazan said it is too early to know.

"We have to wait until after Trump takes office," he said.