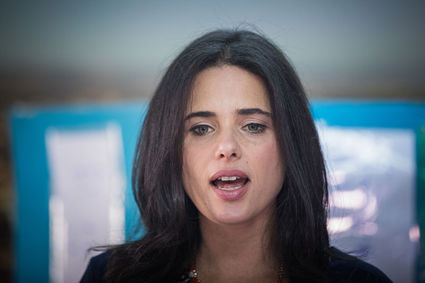 A community of several hundred ensconced in a city of 150,000 Palestinians, Hebron's Jewish residents are considered to be among the most extremist and controversial Israeli settlers.

Shaked, 41, wearing black jeans and a loose fleece, had come to support them.

"No more excuses-in 10 days we need to keep building in Hebron!" she wrote on Facebook, referring to Trump's swearing-in. "We need to build again, to develop Jerusalem and Judea and Samaria. Because this is our home. This is our right."

Like other opponents of a Palestinian state, Shaked cheered Trump's victory in November, viewing it as an opportunity to discard the United States' axiomatic support for the two-state solution.

She had reason to be optimistic: The 2016 Republican platform removed any mention of a two-state solution. Trump's advisers on Israel included Orthodox Jews who had opposed Palestinian statehood. He had also pledged to move the U.S. Embassy from Tel Aviv to Jerusalem in what some viewed as a tacit endorsement of Israeli claims to the city.

Six months later, Shaked may have reason to be disappointed.

Ahead of a planned visit to Israel later this month, Trump has become committed to achieving what he has called "the ultimate deal." He dispatched his negotiator, Jason Greenblatt, to the region for apparently sympathetic talks with all sides. The president called it "an honor" to meet last week with his Palestinian Authority counterpart, Mahmoud Abbas, who the pro-Israel right insists continues to incite Palestinians against Israel and pays salaries to terrorists and their families.

And that embassy move? It has yet to happen.

But Shaked's hope is not yet lost. Because whatever Trump says, she doesn't believe a peace deal is possible.

"I think we're in the midst of a historic opportunity, that there's an administration that really loves Israel," Shaked told JTA in an interview Sunday at The Jerusalem Post Conference here. "I believe that when they study the issue deeply and really, really see what's happening, they'll see that the gaps are too wide. And if they understand that, I think they'll really be partners in thinking outside the box about other solutions."

Shaked is a rising star in Israeli politics. She entered Knesset in 2013 as a bridge builder, a secular woman from a posh neighborhood of northern Tel Aviv representing Jewish Home, a religious Zionist, pro-settler party. But living in Israel's liberal mecca hasn't pushed Shaked to the left: Along with opposing Palestinian statehood, she is opposed to letting African asylum seekers stay in the country, supported a bill to define Israel as the nation-state of the Jews and backed a measure requiring (largely left-wing) nongovernmental organizations to declare foreign government funding.

She won Jewish Home's internal primary ahead of the 2015 elections, placing her in the No. 2 spot behind Naftali Bennett, the party leader. Later that year she was made the justice minister shortly before her 39th birthday-the youngest woman ever in the position. The post makes her the head of the Ministerial Committee for Legislation, which advances or blocks bills. She is also the only woman on the security cabinet, which votes on military action.

Appearing at events like Sunday's conference, in front of an American Jewish audience, is a longstanding way for up-and-coming Israeli politicians to raise their profiles. But though Shaked offers the usual platitudes about how Israel values American Jews, she makes clear that she doesn't believe American Jews should have a say in how the Israeli government works.

Shaked has been just as crusading within her ministry as she is on maintaining control of the West Bank, trying to push Israel's courts in a more conservative and less activist direction. Her legislative attempt last year to change the way Supreme Court justices are selected fell flat, but Shaked still managed to appoint four conservative justices to the 15-member court last week. They will remain until the mandatory retirement age of 70.

Overall, Shaked has appointed 200 of the country's 750 judges, with something of an eye toward diversity. She named Israel's first two judges of Ethiopian descent, as well as the first female judge on the country's Islamic religious courts.

Like many young politicians under the spotlight, Shaked is restrained in talking about her political future. She is more focused on using the power she has now to push Israel to the right-in the courts and in the land.

"I am taking the system in a more conservative direction," she said of the courts. "I'm very happy with my office politically-two to three years ahead, it's hard to say. I hope this government completes its term. I think this is a good government."