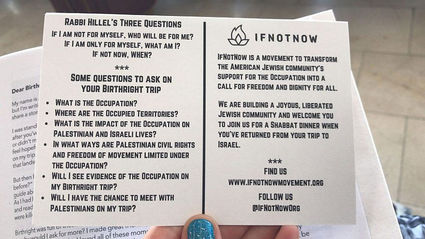 IfNotNow attempts "to end American Jewish support for the occupation," referring to lands administered by Israel after wars, including eastern Jerusalem.

Tidhar told JNS, "They set up a table with a sign and snacks, and then they were coming up to participants while we were standing in line. While they were talking to participants, they were video recording and transcribing the conversations, saying 'you should learn the truth about the country you're about to visit' and that 'Birthright goes against Jewish morals.'

"Even though the airport is a public place, it's a total ambush on their end, coming with this sign that says Birthright on it and trying to hand out snacks," maintained Tidhar.

According to the student leader, some of the Taglit Birthright participants were "asking them what are they trying to achieve from this," while another defended the organization's right to "share their side."

"We have to figure it out more with our guide, but I think it's fair to have an open and honest conversation about it," said Tidhar. "I think it's a huge problem in the states now."

According to Yona Schiffmiller, North American liaison at NGO Monitor, which produces and distributes critical analysis and reports on the activities of the international and local NGO networks, "IfNotNow for the last couple of years has spent most of their energy on trying to disrupt the Jewish communal institutions, whether its by hosting protests or sit-ins inside of Jewish communal institutions."

But Schiffmiller maintained that the assault on Birthright speaks to a more fundamental problem than IfNotNow's attempt to dismantle Jewish communal institutions.

"There is a basic mischaracterization about the embrace of Israel as a part of people's Jewish identity," he told JNS. "You can be highly critical of Israeli government policy, but that doesn't mean you cannot embrace Israel as part of your identity-and that's something that Birthright tries to engender.

"Getting involved in Birthright is very misguided by IfNotNow. It blurs the lines between the legitimate criticism of Israeli policy and trying to prevent people from having a strong pro-Israel identity as a part of who they are," said Schiffmiller.

Neither the Birthright providers nor the Taglit Birthright umbrella organization chose to comment on the incident.