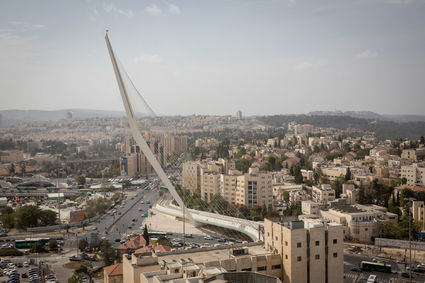 (JNS)-Just like "Rome wasn't built in a day," neither was Jerusalem, says Deputy Mayor of Jerusalem Fleur Hassan-Nahoum.

As a part of the city's development endeavors, Jerusalem's main entrance will undergo a grand makeover-a million-square-meter project including construction of a new entryway into the city, extension of the light rail and various new towers.

Along with such growth, Jerusalem residents can expect associated growing pains since private vehicles will be blocked from entering Jerusalem from the city's main entrance for three years, beginning in July 2019.

As a result of the road closures, traffic between the Chords Bridge and the International Convention Center will not be allowed for private vehicles, although public transportation will remain unchanged. An alternative route will be opened, passing through Herzl Boulevard and weaving around the government offices towards the city center.

Long term, according to Transportation Minister Israel Katz, the building of the new entryway into the city will decrease traffic at Jerusalem's entrance by branching out from the Motza Bridge on Route 1, the Jerusalem-Tel Aviv highway. It will also make room for an extension to the city's light rail.

Most in the Jerusalem municipality are supportive of the building efforts, which are part of a larger plan for the transformation of Jerusalem.

The building project, which intends to "create a new source of income and quality job creation, coupled with the startup ecosystem that was built over the last six years, will create a cluster of business, academic and economic opportunities," Hassan-Nahoum told JNS.

Both she and Ofer Berkovitch, a member of the city's planning and construction committee, as well as head of Hitorerut, the largest party in Jerusalem's municipality, called the planned expansions a "game changer" for the city.

Previously taking part in the advancement of the project under Jerusalem's former mayor Nir Barkat and former deputy mayor Kobi Kahlon, Berkovitch called the project a "very important" step in creating a new business center in the city next to the most developed transportation hub.

The construction is within walking distance to the governmental buildings, with the hope of expanding research institutions and governmental offices and services.

As the capital of Israel, "the government should sit and act from Jerusalem," said Berkovitch.

As a part of the building projects, noted Berkovitch, 30 percent of the material will use the signature Jerusalem stone, along with other more modern material such as glass and iron, "a symbol that Jerusalem is moving forward."

While some worry that these modern touches will change the historical nature of the city, Berkovitch noted that the building includes no historic areas, that buildings will not be built as high as they are in Israel's center, and that the new material will make the city more inviting and attractive.

Hassan-Nahoum and Berkovitch agreed that one of Jerusalem's major problems is lack of commercial office space, which helps the city to develop economically through rent, taxes and job creation.

"I believe the location and features of the project will help us to bring new jobs to the city," said Berkovitch. "More office space will mean more businesses, whether its lawyers, bankers or high-tech."

Creating jobs will keep "young people, students and techies" in Jerusalem, stressed Hassan-Nahoum, noting that the city is working to "ensure that all the marginal populations are included in this economic prosperity."

Berkovitch also maintained, "I see this project as a very strategic and important one to change the employment portfolio of the city, keep youngsters and include the ultra-Orthodox into job market."

But until then, many residents are worried that traffic will greatly worsen.

Berkovitch acknowledged that it will "be a challenge," and "citizens will be impacted by the construction and traffic problems through the next years."

With other concurrent projects in the city that also create traffic, he expressed his concern that the roadwork will create an "impossible reality in the city," posing that current Jerusalem Mayor Moshe Lion is "not doing a serious job in managing the hard times ahead."

He continued, "I didn't hear a clear program [from him] of how to deal with changes and create alternatives to help the traffic."

Berkovitch recommended that the mayor spend serious resources in mid-time solutions to decrease traffic, examine the timing of the different projects in the entrance of the city and ensure that the fast train from Tel Aviv, which will take just 23 minutes, works efficiently before main roads are closed.

Still, Berkovitch is sure that the projects will be worth it long-term.

He explained that in the last decade, Jerusalem missed out on "a lot of changes happening in Israel's cultural and high-tech revolution," and this project will help Israel catch up.

"We still have a problem of lack of new, modern offices for big companies," he said, voicing his hope that "this project will create the possibility to bring strong firms like Google and Facebook to Jerusalem from the center [of Israel]."

Berkovitch said housing options that support employment for young adults and singles, in addition to nightlife venues and cultural institutions, are also being built. Jerusalem's major conference center is expanding, and walking and bike paths with public spaces and trees will enhance the area.

Likewise, posed Hassan-Nahoum, while closures are an inconvenience for residents, they are a necessary aspect "to keep growing and developing, ultimately for the benefit of the whole city."

"To become economically agile and build infrastructure, we'll have a better city and everyone will benefit. Birth is painful, but you get a baby at the end of it," she said.

Lisa Barkan, resident of Jerusalem for 32 years and former marketer for the Jerusalem Development Authority, agreed.

Working in the municipality back in 1991-92, she recalled, "When Kikar Safra was being built, we walked in mud and dirt every day to get to the office from the parking lot and buses."

"And look what we have now," she remarked.

Barkan recalled the growth of the last three decades, posing that growth has always required patience. "Think about how the city was 30 years ago with its small and run-down bus station," she posed to JNS. "We needed a new building to handle the increase in demand for public transportation. Yes, its being built was a mess, but sometime we have to tolerate mess in order to grow."

"Look at the light rail," she continued. "Jaffa Street was closed and a huge mess for years. Businesses closed. People avoided the downtown. We really suffered. And now we reap the benefits."

Barkan, who founded Jerusalem Village, an organization with the goal of introducing those who make aliyah to Israeli culture and peers, maintained that the greatest challenge in Jerusalem is a lack of jobs, which she believes leads recent graduates and young immigrants to leave the city for other areas.

"This is a waste of great talent, as many of these olim ['new immigrants'] come with one and sometimes two degrees, along with work experience, a strong sense of open Judaism and a deep understanding of democracy," she said.

"The new center being built at the entrance of the city will help us give people what they want-access to state-of-the-art working environments that are easily accessible. With this new center and the high-speed train, we will have plenty of people from outside the city coming to work here," said Barkan.

"The future is so grand!" she proclaimed. "We just have to walk in mud for a while."