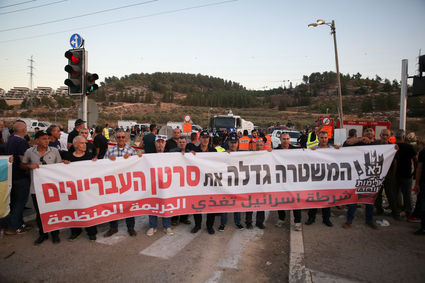 Israeli Arabs protest against violence, organized crime and recent killings in their communities. This demonstration took place in the Arab town of Majd al-Krum in northern Israel, on Oct. 3, 2019.

(JNS)-The Arab Israeli public came out in force during the second round of elections on Sept. 17, and according to an Arab Knesset member and others, was motivated to prevent the formation of a right-wing government headed by Prime Minister Benjamin Netanyahu, who also heads the Likud Party.

On Wednesday, the Joint Arab List announced that it will boycott Thursday's swearing-in ceremony for the new Knesset as part of a general strike among Arab Israelis to protest what they say is the government's failure to address rising levels of violence in their neighborhoods.

The Arab public also voiced concern by what it perceives as racist campaign rhetoric and a failed effort before the election to place cameras at polling places-a move encouraged by Netanyahu that seemed aimed at them.

Knesset member Yousef Jabareen of the Hadash Party, also head of the International Relations Committee of the Joint List, told JNS that their strong showing at the polls "may prevent Netanyahu from establishing an extreme right-wing government."

"Indeed, many in our community believed that Netanyahu could be defeated, and they wanted to contribute to achieving this goal," he said.

He continued, noting that "there has been a strong demand by our community to do our best to prevent Netanyahu from continuing in government. Indeed, he has been extremely inciting against us, promoting discriminatory legislation and leading efforts to expand settlements and annex occupied Palestinian land to Israel."

Jabareen added that the desire to put an end to Netanyahu's rule is what motivated many voters in the Arab sector to take part in the election.

"Being the third-largest party in the Knesset should give us more political power-not just in the Knesset, but in our popular struggle as well as in our international outreach."

Indeed, the Arab parties (except Balad) already usurped the Israeli political scene by recommending Blue and White Party leader Benny Gantz for prime minister. It was the first time in nearly three decades that Arab parties endorsed a Jewish leader. Nevertheless, the Arab parties still ruled out sitting in a coalition government led by Gantz.

As such, neither Gantz nor Netanyahu  have enough seats to form a governing coalition as talks continue.

"In any case, we will be a strong opposition to any government that will continue the discriminatory policies against us and perpetuate the occupation," said Jabareen. "We will continue our persistent struggle against discrimination and racism in Israel while also advocating for the establishment of a Palestinian state based on the 1967 borders, as this is the only viable solution for the region."

'Keep the far-right from gaining power'

Shahin Sarsour, who has been involved in Arab politics for more than 12 years and served in the previous Knesset as a parliamentary consultant to Knesset member Talab Abu Arar of the Islamic Movement's parliamentary party, told JNS in an interview that "the main slogan of the Joint List in its election campaign was to bring down Netanyahu and keep the far-right from gaining power."

The Arab nationalist Balad Party has come out against recommending Gantz, while the Islamic Movement's UAL Party, Ahmad Tibi's Ta'al and Hadash have not objected, save for a few members.

Rodayna Badir, an expert on Arab society in Israel who is currently carrying out research at the Hebrew University of Jerusalem, told JNS, "The increased turnout in the Arab sector was due to increased racist rhetoric by Netanyahu."

Another factor was the recently passed controversial nation-state law, she said.

The law formally established Israel as "the nation-state of the Jewish people," and some minorities found that it discriminated against them.

Added to that, continued Badir, is a high rate of violence in Arab towns, perceived to be inadequately addressed by the authorities.

"The Arabs united with one goal in mind: to topple Netanyahu," she exclaimed.

In Arab-Israeli social media, there has been chatter that the Blue and White Party headed by Gantz is led by generals, and includes "killers" and leaders of wars in Gaza; still, Arab society prefers Gantz over Netanyahu.

Sarsour added that "the Balad Party is likely to withdraw from the Joint List because of its opposition to the move to support Gantz and due to other issues relating to how the Arab parties should relate to the next Israeli government."

He also points out that the nation-state law and violence in Arab localities were strong motivating factors in the election for the Arab public.

He concluded by saying that "the Joint List must do the utmost to strengthen its relationship with Arab society, and if this is not done, the Arab public would punish the Arab parties in the next elections."

The Joint list of Arab parties is made up of the Communist Hadash, which is the most powerful and headed by Ayman Odeh. There is the United Arab List (UAL), which is the Islamic Movement's parliamentary branch, and Ahmad Tibi's Ta'al Party, which largely revolves around his personality and tends to take Arab public consensus positions on most issues. Then, there is the Arab nationalist Balad Party.

The Joint List is ideologically divided between Islamists, nationalists and Communists, united to form a block in order to pass the electoral threshold of 3.25 percent.

Despite such differences, they stand against Israel's presence in Judea and Samaria, as well as the fact that it controls all of Jerusalem. They wish to change the current Israeli state into something else and remove its Jewish identity, though don't agree on the way to do this or the vision behind it.

Arab politicians from various parties voice support for a binational state that would include all the Palestinian territories and lead to the end of Israel as a Jewish state; others call for two states where Israel would be reduced to its pre-1967 borders, and Israel itself would lose its identity as a Jewish state and become a state "for all its citizens."

The Islamic Movement in Israel-an offshoot of the global Muslim Brotherhood-seeks a long-term goal of an Islamic state ruled by Sharia law. However, the group is very pragmatic, realizing  that's not realistic right now, and so it is willing to play the political game with its UAL Party. This party could be compared to Turkey's AK Party headed by President Recep Tayyip Erdogan, with which it has good relations.

The Hadash Party states on its website that it supports "the evacuation of all the territories occupied in June 1967 and the establishment of a Palestinian state alongside Israel," and calls for "a democratic and pacifist Israel which integrates among the peoples of the area."