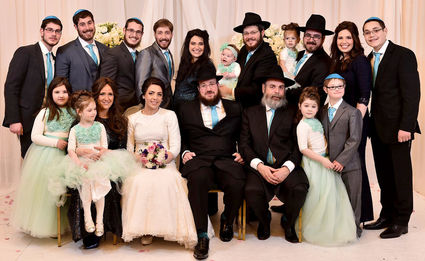 The prevalent thinking in 1972 was that the seventh Chabad Rebbe, Menachem Mendel Schneerson, on his 70th birthday, was going to reveal his retirement plans. Rather, he laid down a challenge. He was offering his birthday wish to the community to establish, by his 71st birthday, 71 new Chabad institutions throughout the world.

Rabbi Sholom B. Dubov, Chabad chief rabbi of the Greater Orlando area was with him at that public gathering. Within a few hours, 71 rabbis were to go forth and establish Chabad centers in their newly assigned communities all over the world. Dubov was only 15 years old at that time. He was inspired by the Rebbe and he marveled at how quickly the rabbis fulfilled his birthday wish.

"Each year on or near my father's birthday, we went as a family to the Rebbe's private office at Chabad Headquarters at 770 Eastern Parkway in Brooklyn. My mother, father, 12 brothers and sisters went for guidance and to receive a blessing. The Rebbe would interact with us in a loving and caring way," Dubov shared.

For his 13th birthday, the family went for a personal audience to receive the Rebbe's blessing. "During the audience I remember he asked if I memorized a Chasidic discourse, known as a Maamer, in honor of my bar mitzvah. I answered in the affirmative. He asked me to recite the first section, which I did, and then he smiled broadly, blessing us all in his inimitable way," Dubov fondly recalled.

In 1929, Rabbi Yosef Schneerson, the sixth Rebbe of Chabad, sent Rabbi Dubov's grandfather, Rabbi Yitzchak Dubov, and his family to Manchester, England where he served the Jewish community until his passing in 1977.

Rabbi Dubov's father, Yehudah Dubov, was born in Riga, Latvia in 1926. Dubov's father came to New York to complete his rabbinic studies at the Central Lubavitch Yeshiva in Brooklyn. There he met his wife, Chava, who was born to an illustrious, observant Jewish family in 1930 in Philadelphia, Pennsylvania.

In 1933, 3-year-old Chava and her family moved to Brooklyn. Yehudah and Chava were married on Jan. 25, 1950. They resided in Brooklyn where Rabbi Yehudah Dubov served as a Shochet in various live-chicken markets in New York City. When they closed, he worked for Empire Poultry until his retirement. He passed away at the age of 90 in 2017. Chava still lives in their family homestead in Crown Heights, Brooklyn.

Dubov attended elementary school in Brooklyn where boys and girls were separated. After four years of high school he pursued the rabbinate and attended the Rabbinical College of America in Morristown, New Jersey.

"There were about 100 of us living in a dorm. There where students from all over the world. However, the Yeshiva students all had similar backgrounds. We looked the same, behaved the same, and all had similar goals, similar values. The world didn't separate us," Dubov observed.

Afterwards, he was sent by the Rebbe, with nine other Yeshiva boys to New Haven, Connecticut, to continue his rabbinic education while serving as a student rabbi at the Chabad House at Yale University in New Haven. "We all learned to forge meaningful deep relationships, friendships which have endured to this day," Dubov recalled.

In 1982, Dubov returned to Brooklyn to finish his rabbinic studies and he was ordained the summer of 1982. "My greatest yearning and wish, was to be part of this illustrious chosen team of the Rebbe. I was working toward someday having my own Chabad."

Dubov met his future wife, Devorah Leah Konikov, in 1984. "We were match-made, which is different from the way courting is done in the secular world. There are rules. No physical contact, just conversations. I went on eight dates, each lasting two to six hours before we decided that we were for each other. It's like a CEO search. I don't like to use this metaphor, but the hard questions are asked and answered. If you're compatible, you both make a decision to move forward. 'Love' is a term that is thrown around a lot, however, 'love' needs to be earned and time and commitment strengthen the bonds of any genuine relationship. We've been married for 35 years now with nine beautiful children. Statistically it's proven to work. There is a single-digit percent divorce rate in the Chabad community vs. a 40 to 60 percent divorce rate in the secular world."

On Dubov's 25th birthday, he and his wife were designated to go to Central Florida as an emissary of the Rebbe. At that time Rabbi Abraham Korf was the head of Chabad in Florida. Korf lived in Miami, ran the Chabad centers in that area as well as being responsible for the entire state. Dubov's appointment as the Chabad emissary to the Central Florida area was facilitated by the Rebbe's chief-of-staff, Rabbi Mordechai Hodakov, who personally knew Dubov's grandparents. The Dubovs were flown to Orlando in October 1984 to meet with several families and Jewish leaders within the community. "It was immediately evident that the city didn't have a large Jewish population and they were spread out in a sprawling geographic area. There wasn't a Kosher bakery, supermarket nor mikvah," Dubov said.

During Chanukah in December 1984 Dubov and Devorah Leah officially settled in Orlando, with a $12,000 grant given to them by the Rebbe. They had $1,000 a month to live on, and were expected to find a way to stand on their own. "At that time my Yeshiva classmates were given their assignments as well. They were sent to areas like Nebraska, Canada, Massachusetts, Florida and Hawaii to name a few. I'm happy to report that every one of us has succeeded, no one has failed. No one went home to Brooklyn. They all have thriving Chabad centers around the world and we have never lost our connection to one another, to this day."

The Dubovs' first apartment was on Aristotle Avenue, near the UCF campus. He held intermittent services at the UCF campus as well as in their small townhouse on Aristotle Avenue. Dubov served as the Jewish students chaplain for several years. In 1986, with the Rebbe's blessing, the young couple moved to Maitland, where they have lived for the past 34 years.

In 1987 they rented a storefront on Highway 436 in Casselberry, where they worshipped for seven years, until they built their center in 1994 in Maitland that stands today.

"We have nine children." Dubov said with pride. "Our eldest son is 34, Rabbi Levik. He directs the Chabad of Downtown Orlando. He's married to my daughter-in-law, Slavi, and they have two children, or should I say my wife and I have two beautiful grandchildren."

Their second son, Sruly, 30, is an entrepreneur who resides in Los Angeles, California. First-born daughter, Chanshy, is 32 and her husband, Rabbi Yanky Majesky, directs the Chabad of North Orlando. "We have six more wonderful grandchildren from them."

Chaya is 27. Her husband, Rabbi Shmuli Sasonkin, serves the students near Rollins College in Winter Park. "They have given us four beautiful grandchildren."

Rabbi Mendy, 25, works at the Chabad in Maitland and is also a sports enhancement coach for teens and young athletes. Rabbi Tzviky, 23, is newly married, and he and his wife, Fraidy, are coming to Orlando in June 2020. They expect them to help expand the Chabad of Orlando. Rabbi Dovid, 22, is currently the programs director at the center in Maitland. Tzaly is 19 and is studying in Yeshiva to receive his Rabbinic Ordination.

"And then there's my youngest son, Simcha, who is truly a blessing," Rabbi Dubov said. "Simcha is now 15 years old. Six weeks before he was born we were told that he had Downs Syndrome. We didn't have much time to prepare emotionally. We had little experience with this sort of thing."

"Simcha was born with a heart defect which would require open-heart surgery. His heart was the size of a walnut and he needed to wait until his heart got stronger and bigger. When he was five months old he had open-heart surgery with an excellent prognosis of recovery and survival. Obviously, Simcha is with us today, and he's integrated beautifully into our family. He brings such joy and happiness with him wherever he goes that we feel he truly is a blessing given to us from God. He's changed us in ways we never imagined. He's brought joy, richness and a fullness into all our lives."

In addition, all of Devorah Leah's six brothers and sister serve as Chabad emissaries. Three of her siblings were appointed by Rabbi Dubov and work as emissaries in Central Florida. Her sister, Chani, and her husband, Rabbi Pinchas Ezagui, serve in Volusia County. Her brother Rabbi Zvi Konikov and his wife, Shulamit, serve in Brevard County. Another brother, Rabbi Yosef Konikov, and his wife, Chany, serve in South Orlando.

In Central Florida today, there are seven thriving Chabad centers: Maitland, South Orlando, North Orlando, Downtown Orlando, Rollins College, University of Central Florida and Altamonte Springs. Over the years they have continued to fulfill the Rebbe's vision, having touched and served a multitude of Jews from all walks of life.

"To think, when I came here in 1984, I had no business plan, no idea of how to budget, no clue how to run a nonprofit organization. I didn't even know how to fund raise nor how to market ourselves. What has occurred here and all over the world is simply a miracle," Dubov said.

Recently, a new Vaad (council) has been appointed to help Korf oversee Chabad activities in the state of Florida. Dubov, along with seven other rabbis, have been named to the board. 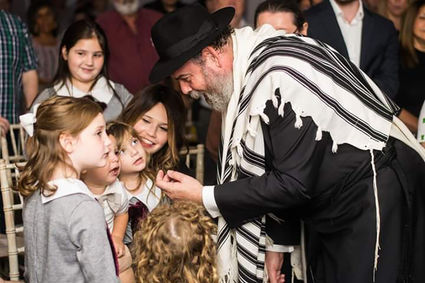 Rabbi Dubov talking to his grandchildren (l-r) Shterna, Menny, Braina, Chaya (in the back), as daughter Chanshy looks on.

"Our hope and our vision, is to complete the mission the Rebbe started in 1950. The Rebbe wanted three things:

• All Jewish people should be united and unified as one, without distinction of observance.

• Judaism, along with its teachings and practice, should be acceptable and available to each and every Jewish person across the globe.

• All Jews, along with all of humanity, should usher in the era of the final redemption with peace throughout the world especially in the land of Israel.

The Rebbe's emissary Rabbi Dubov and his family are continuing to fulfill his wishes. They are the embodiment of the Chabad Mission. Today his seven Chabad Centers in Orlando have touched tens of thousands of lives and will continue to do so until their mission is fulfilled one Jew at a time.