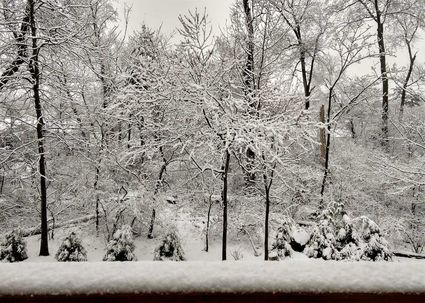 (JNS)-What's with this weather, anyway?

I mean, the majority of us have accepted our lives as indoor cats right now, but a little sun wouldn't hurt, especially in the U.S. Northeast, where as of today, the highest cases of COVID-19 can be found in New York, New Jersey, Massachusetts and Pennsylvania.

I'm not thrilled to be part of this group, but that's what it is.

Since I work remotely in my basement directly under a window, I theoretically monitor the weather around the clock (as well as notice the cobwebs that start to gather at the corners of said window ... does that really mean that a spider owns them?)

This afternoon, thunder unnerved the skies with its loud claps and down came the rain (again) after a wet, warm, snow-free winter.

Of course, this past weekend in New England, it actually did snow. Kids were social distancing between mini-snowmen (why always men?) after an unseasonably temperate March.

Last month, we had a tornado warning here. For about 15 minutes, the winds pounded our brick house and branches flew as we watched the trees sway from the kitchen window. We go from room to room, view to view.

That was on the heels of another tornado at the end of October, when we got a warning at midnight so ominous that my husband grabbed the kids from their beds and brought them down to the basement, where I was working. That might have been a sign: early room-sharing.

Lately, every night at around midnight, I crack the storm door open and listen. Listen to nothing. It's the quietest I've ever heard the streets near me and maybe streets anywhere at all. On Sunday night, there was a frost warning (this is mid-April, people). I keep checking on my four reddish-pink tulips, in full bloom now, but whose buds popped out at the end of February.

I don't particularly like talking about the weather. It makes me feel old. I love older people, and I love listening to them rattle off what they had for lunch in-between weather and traffic reports. I'm just not there yet.

Or maybe I am. Because that's a big activity at this point. We're all looking out the window, physically and metaphorically, until this coronavirus hot point passes, which we all hope, though don't really know, it will.

April's nearly over. We want to be out in May, picnicking in June and playing Frisbee on the beach in July. We would be thrilled if our kids were at camp in August. And then back to school in September.

Even though, deep down, we're really not planning for any of that.

As for us, I just checked the weather online. It's forecasting rain for the next week, except for tomorrow, when the sun's supposed to shine. The high is estimated to be 57. The low-get this-is expected to go down to about 36 degrees at night.

So I'm getting the winter coats back out. After dinner, we'll gather some wood and kindling for a fire pit. I'll need to buy marshmallows.

In fact, I'm deeming them essential.

Carin M. Smilk is the managing editor of JNS.

This Reporter's Notebook will appear starting on March 16 until the end of the month (or when schools reopen).