How three Israeli filmmakers wound up becoming the story in Africa 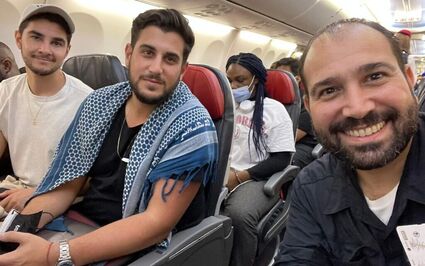 Noam Leibman, Rudy Rochman, David Benaym onboard their flight from Abuja, Nigeria, to Istanbul, Turkey, after their release.

(JNS) - Three Israeli documentary filmmakers arrived home safely from Nigeria at the end of last week, after what they described as 20 "hellish days" detained under inhumane conditions by the government's Department of State Services security agency.

Rudy Rochman, David Benaym and Noam Leibman had set off for the African country as part of their "We Were Never Lost" documentary project aimed at telling the stories of disconnected and lesser-known Jewish communities around the world.

However, after several days of filming members of the Jewish Igbo people in the southeastern city of Ogidi...