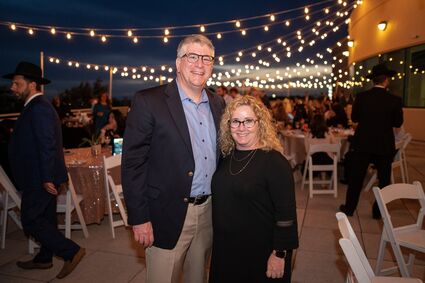 As another successful school year comes to an end it's time to celebrate. It's hard to believe that it's been 12 years since the founding of Orlando Torah Academy. This has been an exceptional year of continued growth as enrollment has grown to almost 150 students from preschool through 8th grade. With children from over 60 families attending, OTA has established itself as the premier destination for Jewish education in Orlando.

This year OTA will be honoring two very deserving couples at its annual Gala Dinner. Dr. and Mrs. Alan and Shari Wladis will be the guests of honor. Alan and Shari have been dedicated to the growth of Jewish education since they moved to Orlando 20 years ago. Together, they have been part of many Jewish causes throughout Orlando. Shari, through her involvement in many local schools has brought the level of Jewish education in Orlando to new heights. OTA has been privileged to have her as the General Studies director for the past 6 years, and the school's phenomenal growth is a testament to her dedication to making OTA an outstanding school.

OTA will also recognize Rabbi Michoel and Mrs. Elisheva Rennert with the Amud HaChesed (Pillar of Kindness) award. Michoel and Elisheva are a couple who put their community's needs before and above their own. They are always ready to jump in and many times have spearheaded causes to benefit OTA and the Orlando Jewish Community. All community affairs are personal affairs to Michoel and Elisheva and it is a privilege to be able to recognize them for what they do for Orlando Torah Academy and for Orlando Jewish Life.

The Annual Gala Dinner will take place on the Terrace at the Orlando Science Center on June 13 at 7:30 p.m. Let's join together and pay tribute to these special couples and celebrate 12 years of educating the next generation of Jewish leaders. RSVP online at orlandotorah.com/dinner or email office@orlandotorah.com for more details.